A new study published in the journal Nature Communications provides additional evidence that a specific group of controversial pesticides, neonicotinoids, affects wild bees negatively. The work was funded by the UK government and related data of wild bee distributions over time to the introduction of the pesticides in British fields. It is the first to link the pesticides to the decline of many bee species in real-world conditions.

Earlier work which showed detrimental impacts on bees has studied the effects of the insecticides in laboratory conditions and on a few wild-bee species in a small number of fields over a few weeks only. The considerable experimental evidence for short-term sub-lethal effects of exposure to neonicotinoids for a few bee species had not, however, convinced all stakeholders that the insecticides are to blame for widespread declines in bee populations.

This study adds a different angle to the evidence by relating a dip in the populations of wild bees across the English countryside over nine years with the use of chemicals on the crops in which the bees forage. It estimates that the neonicotinoids were responsible for a 7% decline, on average, in the bees' distribution, which is equal to about half of the total drop, with the other half left unexplained.

Although the study cannot show a causal relationship between the insecticide use and the decline of wild bees, the correlations found strengthen the case environmentalists have been making over the past few years.

Wild bee declines have been ascribed in part to neonicotinoid insecticides. While short-term laboratory studies on commercially bred species (principally honeybees and bumblebees) have identified sub-lethal effects, there is no strong evidence linking these insecticides to losses of the majority of wild bee species. We relate 18 years of UK national wild bee distribution data for 62 species to amounts of neonicotinoid use in oilseed rape. Using a multi-species dynamic Bayesian occupancy analysis, we find evidence of increased population extinction rates in response to neonicotinoid seed treatment use on oilseed rape. Species foraging on oilseed rape benefit from the cover of this crop, but were on average three times more negatively affected by exposure to neonicotinoids than non-crop foragers. Our results suggest that sub-lethal effects of neonicotinoids could scale up to cause losses of bee biodiversity. Restrictions on neonicotinoid use may reduce population declines.

Read the full paper here (open access). You can find additional coverage on the BBC, Financial Times and Friends of the Earth websites.

You can read related research by browsing the following category of our research library: Biodiversity and ecosystems; and through the keyword categories: Ecosystems & ecosystem services; Biotechnology/GMO. 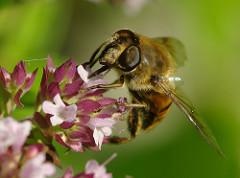