This paper presents evidence that humans are undoubtedly altering many geological processes on Earth—and that we have been for some time. According to the international group of geoscientists the evidence is overwhelming that the impact of human activity on Earth has pushed us into a new geological era, a human-dominated time period, termed the “Anthropocene.”

It looks at the stratigraphic evidence to officially differentiate the Anthropocene from the preceding Holocene epoch.  Stratigraphy is a branch of geology concerned with rock layers (strata) and layering (stratification).

The authors review climatic, biological, and geochemical signatures of human activity in sediments and ice cores. They conclude that the Anthropocene stands alone stratigraphically as a new epoch beginning sometime in the mid–20th century. Humans have changed the Earth system sufficiently to produce a range of signals in sediments and ice, and these are sufficiently distinctive to justify recognition of an Anthropocene Epoch in the Geological Time Scale.

By analysing recent lake sediments the researchers have found that glacier retreat due to climate warming has resulted in an abrupt stratigraphic transition from proglacial sediments to nonglacial organic matter, effectively demarcating the onset of the Anthropocene.

Humans are altering the planet, including long-term global geologic processes, at an increasing rate. Any formal recognition of an Anthropocene epoch in the geological time scale hinges on whether humans have changed the Earth system sufficiently to produce a stratigraphic signature in sediments and ice that is distinct from that of the Holocene epoch. Proposals for marking the start of the Anthropocene include an “early Anthropocene” beginning with the spread of agriculture and deforestation; the Columbian Exchange of Old World and New World species; the Industrial Revolution at ~1800 CE; and the mid-20th century “Great Acceleration” of population growth and industrialization.

Geochemical signatures include elevated levels of polyaromatic hydrocarbons, polychlorinated biphenyls, and pesticide residues, as well as increased 207/206Pb ratios from leaded gasoline, starting between ~1945 and 1950. Soil nitrogen and phosphorus inventories have doubled in the past century because of increased fertilizer use, generating widespread signatures in lake strata and nitrate levels in Greenland ice that are higher than at any time during the previous 100,000 years.

Detonation of the Trinity atomic device at Alamogordo, New Mexico, on 16 July 1945 initiated local nuclear fallout from 1945 to 1951, whereas thermonuclear weapons tests generated a clear global signal from 1952 to 1980, the so-called “bomb spike” of excess 14C, 239Pu, and other artificial radionuclides that peaks in 1964.

Atmospheric CO2 and CH4 concentrations depart from Holocene and even Quaternary patterns starting at ~1850, and more markedly at ~1950, with an associated steep fall in δ13C that is captured by tree rings and calcareous fossils. An average global temperature increase of 0.6o to 0.9oC from 1900 to the present, occurring predominantly in the past 50 years, is now rising beyond the Holocene variation of the past 14,000 years, accompanied by a modest enrichment of δ18O in Greenland ice starting at ~1900. Global sea levels increased at 3.2 ± 0.4 mm/year from 1993 to 2010 and are now rising above Late Holocene rates. Depending on the trajectory of future anthropogenic forcing, these trends may reach or exceed the envelope of Quaternary interglacial conditions.

Biologic changes also have been pronounced. Extinction rates have been far above background rates since 1500 and increased further in the 19th century and later; in addition, species assemblages have been altered worldwide by geologically unprecedented transglobal species invasions and changes associated with farming and fishing, permanently reconfiguring Earth’s biological trajectory.

These novel stratigraphic signatures support the formalization of the Anthropocene at the epoch level, with a lower boundary (still to be formally identified) suitably placed in the mid-20th century. Formalization is a complex question because, unlike with prior subdivisions of geological time, the potential utility of a formal Anthropocene reaches well beyond the geological community. It also expresses the extent to which humanity is driving rapid and widespread changes to the Earth system that will variously persist and potentially intensify into the future.

See the full article here and see an article in Science Daily discussing the findings here.

Read more about climate trends and projections and climate change: impacts and adaptation, and see search results for anthropocene. 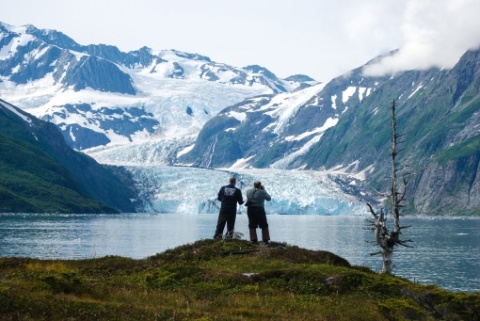