This report from the Intergovernmental Panel on Climate Change (IPCC) reviews the evidence on climate change’s impacts on ecosystems, biodiversity and people. It finds that there is a greater than 50% chance that global warming will reach or exceed 1.5°C (above the 1850-1900 baseline) in the near term, even under very low emissions scenarios, and that human-induced climate change has already caused “widespread adverse impacts” for nature and for people.

The observed changes in the world’s climate include more frequent and more intense heat on land and in the ocean, heavy precipitation, drought, and weather that enables fires. Impacts on people and nature include increased heat-related deaths, warm-water coral bleaching and death, tree deaths related to drought, greater areas burned by wildfires in some regions, increased negative effects from tropical cyclones, and slow-onset processes such as ocean acidification, sea level rise and regional decreases in precipitation.

The report finds that climate change is causing substantial damages, some irreversible, to terrestrial, freshwater, coastal and open ocean marine ecosystems. These include widespread deterioration in ecosystem structure and function, shifts in seasonal timing, shifts in species towards poles or higher elevations, mass mortality events on land and at sea, and loss of kelp forests. Irreversible damages include some species extinctions, while changes approaching the point of irreversibility include hydrological changes caused by glacial retreat, and changes in some mountain and Arctic ecosystems caused by permafrost thawing.

TABLE readers may be particularly interested in the following points relating to food and agriculture:

For another summary of the report, see this piece by Carbon Brief: In-depth Q&A: The IPCC's sixth assessment on how climate change impacts the world. 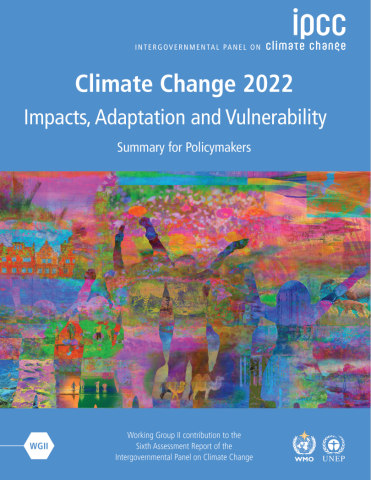