This report, commissioned by the Royal Society for the Protection of Birds, the National Trust and The Wildlife Trusts, examines how the profitability of upland farming systems can be increased at the same time as protecting the natural environment.

The report notes that, in the UK, many upland livestock farms are only profitable because of government subsidies. As the subsidies are likely to be phased out in their current form by 2021, the report searched for alternative business models that would make farms more likely to survive without such payments, using interviews with farmers.

One recommendation is that, by reducing stock numbers to the level that can be supported entirely on the farm’s natural grass growth, farmers can increase their profit margins by making savings on variable costs such as fertiliser - in contrast to the assumption of some farmers that profitability can only be increased by increasing production. This would also have environmental benefits such as avoiding overgrazing and reducing the need to produce cereals for animal feed. According to the report, the current situation for hill farms is one of “high numbers generally being reliant on bought in feedstuffs and the use of artificial fertilisers to improve the grass yield on the farm.”

The report also notes that, if its recommendations fail to make farms profitable, then the land may have to be released for other uses such as building, afforestation or rewilding. 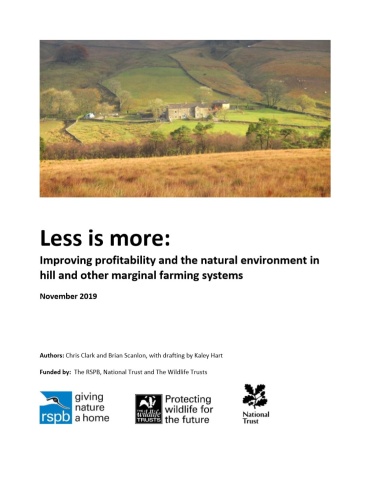