This paper quantifies the carbon emissions, water use and land use associated with the consumption of food excess to requirements, on the basis that overnutrition has sometimes been classified as a form of food waste. It finds high geographical variation in the environmental impacts of so-called excess food consumption, with impacts being an order of magnitude greater in Europe, North America and Oceania than in sub-Saharan Africa.

The paper defines “metabolic food waste” as the consumption of food that leads to additional body weight beyond the so-called “ideal” body-mass index (BMI) of 21.7 (note, however, that the World Health Organisation defines overweight as a BMI of 25 or more and obesity as a BMI of 30 or more; using a BMI of 21.7 as the baseline will therefore class some body weight as “excess” even when the person in question is not overweight or obese).

In Europe, the food groups with the largest contributions to each of the three environmental impact categories are dairy/milk/eggs and meat/offal. Alcoholic beverages also have a significant contribution to greenhouse gas emissions.

The paper argues that consumption of meat, dairy, milk, and eggs should be reduced in industrialised countries to cut environmental impacts as well as to protect public health. However, it notes that animal products can be important to populations at risk of malnutrition.

Since the paper’s calculations are based on national data, it does not discuss the extent to which two people of the same BMI might produce different dietary environmental impacts through their food choices or through differences in their metabolism or activity levels. Similarly, it is possible that someone with a low BMI might consume foods with a relatively high carbon footprint, such as lean red meat, while someone with a higher BMI might consume a diet high in foods with a relatively low carbon footprint, such as grains and sugar. The paper also does not discuss the risk that framing overweight as environmentally wasteful could lead to increased social stigma (for more on this issue, see What is food loss and food waste?).

Obesity represents a titanic cost for the world's health systems but also a substantial ecological cost to the environment. High energy foods have been shown to be the major contributor to Greenhouse Gas (GHG) emissions, challenging the diet-environment-health triangle. The waste of resources and the unnecessary ecological cost due to an excessive consumption of foods leading to obesity have been ignored so far. Metabolic Food Waste [MFW(kg of food)] corresponds to the amount of food leading to Excess Body Fat (EBF) and its impact on the environment, expressed as carbon [MFW(kgCO2eq)], water [MFW(×10 L)] and land footprint [MFW(×10 m2)]. We aim to estimate the MFW(kg of food) in the seven FAO regions, Europe (EU), North America and Oceania (NAO), Latin America (LA), Sub-Saharan Africa (SSA), Industrialized Asia (IA), North Africa, West and Central Asia (NAWCA) and South and Southeast Asia (SSEA), and evaluate its impact on ecological footprints. The overall impact of MFW(tons of food) in the world corresponds to 140.7 gigatons associated to overweight and obesity. Between the different regions, EU is responsible of the greatest amount of MFW(tons of food) volume (39.2 gigatons), followed by NAO (32.5 gigatons). In terms of ecological impact, EU and NAO displayed the highest values for all three MFW footprints, about 14 times more than SSA. We provide evidence of the enormous amount of food lost through obesity and its ecological impact. Reducing metabolic food waste associated with obesity will contribute in reducing the ecological impact of unbalanced dietary patterns through an improvement of human health. 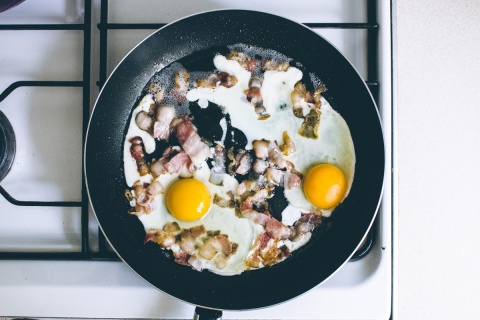