Livestock: On our plates or eating at our table?

This research article provides a new quantitative analysis of data on global feed use and feed use efficiency by livestock, in order to help shed light on livestock’s role in food security.

The introductory section of the paper provides a well-balanced view of the role of livestock in food security, acknowledging both the benefits (mainly in terms of nutrition, but also in terms of providing farm services and income) of livestock rearing, and the drawbacks (mainly in terms of the opportunity costs of feeding human-edible crops – or feed grown on land suitable for growing human edible crops – to animals with arguably poor feed conversion ratios).

The authors classify animal feed in terms of its human edibility and opportunity cost of the land it is grown on, and use a Global Livestock Environment Assessment model (a specific type of Life Cycle Assessment, LCA) to model feed rations for multiple different monogastrics and ruminant livestock animals. The results of this analysis were compared with the findings of 121 peer-reviewed papers on feed rations, revealing strong agreement. Further modelling allowed for the calculation of global land use requirements to provide these quantities of feed.

The authors discuss the alignment and additional contributions of their work to previous studies, acknowledge the limitations and constraints of their methodology (mainly centering on a lack of available data) and state their hope that their analysis will inform further economic modelling. They conclude that further data collection and modelling of livestock feed/food ratios is needed to inform future food security efforts.

Livestock contribute to food security by supplying essential macro- and micro-nutrients, providing manure and draught power, and generating income. But they also consume food edible by humans and graze on pastures that could be used for crop production. Livestock, especially ruminants, are often seen as poor converters of feed into food products. This paper analyses global livestock feed rations and feed conversion ratios, with specific insight on the diversity in production systems and feed materials. Results estimate that livestock consume 6 billion tonnes of feed (dry matter) annually – including one third of global cereal production – of which 86% is made of materials that are currently not eaten by humans. In addition, soybean cakes, which production can be considered as main driver or land-use, represent 4% of the global livestock feed intake. Producing 1 kg of boneless meat requires an average of 2.8 kg human-edible feed in ruminant systems and 3.2 kg in monogastric systems. While livestock is estimated to use 2.5 billion ha of land, modest improvements in feed use efficiency can reduce further expansion. 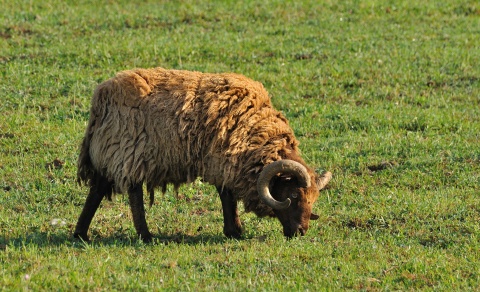