Poor households in developing countries are sometimes included in livestock programmes by humanitarian organisations whereby they are given a cow, a pair of oxen, or a herd of goats. This paper analyses the impacts on the food security of recipients in these kinds of programmes and finds that the effect is positive.

It concludes that dairy cows, draft cattle and goats increase dietary diversity and consumption expenditure and that the effect of the program is substantially greater than a cash gift of equivalent value.

The study shows that livestock transfers significantly increased peoples' incomes and that there was a large, rapid, sustained increase in consumption expenditures.  In total, 300 households in five communities in the Zambian Copperbelt province were interviewed five times over a three-year period. The results also suggest that the benefits even spread to families who did not receive an animal experiences, via, for example increased access to milk.

Smallholder livestock ownership has potential to enhance food security by raising incomes of the poor and by increasing the availability of nutrient-dense foods. This paper exploits the staggered rollout of livestock distribution by Heifer International in Zambia to identify the effects of livestock using statistically similar treatment and control groups in a balanced panel of households. Results indicate that livestock ownership improves dietary diversity through both direct consumption of animal products produced on farm and through increased consumption expenditures. Further results indicate that expanded livestock ownership alters the local food economy to influence food consumption by households lacking farm animals. 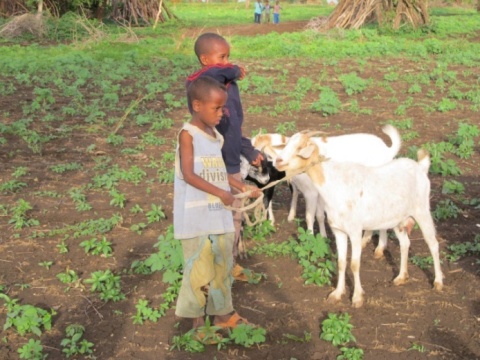