This paper takes countries’ mitigation targets (Intended National Determined Contributions, or INDCs), submitted since the Paris Climate agreement, and, using supplementary information from other official documents, quantifies how much of the promised actions are related to Land Use, Land Use Change and Forestry (LULUCF, primarily deforestation and forest management).

(I)NDCs became NDCs when the Paris Agreement was ratified, and they were finalised and formally submitted to the United Nations Framework Convention on Climate Change (UNFCC). This paper works on the assumption that all country (I)NDCs would be the same as their NDCs, which would not yet have been available at the time the paper was written. (Note that for more regarding the prominence of agriculture within the (I)NDCs see this study by The Research Program on Climate Change, Agriculture and Food Security (CCAFS)).

About a quarter of global GHG emissions (CO2, CH4 and N2O) can be attributed to land use (such as agriculture and forests), and terrestrial ecosystems currently absorb around a third of anthropogenic carbon dioxide emissions. The inclusion of land use within the process of the UNFCCC has been riddled with compromise and controversy, largely due to methodological issues and uncertainties over GHG estimates. The authors collected a variety of information for their analysis, including historical data and projections to 2030, the types of mitigation targets countries express in their (I)NDCs, and how LULUCF is included within the (I)NDCs. The study shows however, that only 68 of the 195 UNFCCC countries included land use in a clear and comparable way in their (I)NDCs, but the authors explain that these 68 countries  still cover 83% of global forest areas. The ways that countries express and define the (I)NDC targets varies, particularly since some compare to a base year and others to a Business as Usual scenario. Countries tend to use a reference point that maximises their apparent mitigation to make them look better, so it is important to take this into account, especially as this can complicate analyses.

The pattern the authors observe is that globally, emissions related to LULUCF have been decreasing since 1990, and the authors display this and a range of possible LULUCF emissions scenarios, based on different policies, in figure 1, copied. They attribute this trend to decreased deforestation in Brazil and increased sinks in the form of managed temperate and boreal forests. The spikes in the graph are the points of peak deforestation in Brazil and other countries, as well as peak years for peat fires (such as in Indonesia). In many tropical countries, the main source of greenhouse gases is often attributed to deforestation, but management in other parts of the world (temperate and boreal) has led to forests becoming net sinks of carbon. From 1990-2010, LULUCF represents a net source of anthropogenic carbon, but according to this paper’s analysis changes to becoming a sink by 2030. This is based on the assumption that all the (I)NDCs will be fully implemented.

The authors also compare their LULUCF trend with other, well-known global datasets from the UNFCCC, FAOSTAT and the IPCC. There are significant differences between the trends (seen clearly as the markedly different lines in Figure 2), but the authors explore and try to explain why these may have occurred. The biggest differences lie between their analysis and that of the IPCC, with a large ≈3GtCO2eyr−1 discrepancy between the two from 2000-2009. They conclude that methodological differences explain the discrepancies and criticise the 'book-keeping' model utilised by the IPCC. A notable difference is whether large sinks in managed forests are designated as 'anthropogenic' or as 'natural fluxes'. When these differences are considered, the authors conclude that different LUCLUCF data sets are actually much more consistent than they appear, and they call for greater reconciliation and collaboration to reduce the risk of further methodological clashes and conflicting messages in the future.

This paper shows that LULUCF is an important component of emissions mitigation strategies, and highlights the need for consistency when reporting and analysing data. This is important not only to improve trust in LULUCF data, but also contributes toward making mitigation strategies more accurate and effective.

Forest-based climate mitigation may occur through conserving and enhancing the carbon sink and through reducing greenhouse gas emissions from deforestation. Yet the inclusion of forests in international climate agreements has been complex, often considered a secondary mitigation option. In the context of the Paris Climate Agreement, countries submitted their (Intended) Nationally Determined Contributions ((I)NDCs), including climate mitigation targets. Assuming full implementation of (I)NDCs, we show that land use, and forests in particular, emerge as a key component of the Paris Agreement: turning globally from a net anthropogenic source during 1990–2010 (1.3±1.1 GtCO2eyr−1) to a net sink of carbon by 2030 (up to−1.1±0.5 GtCO2eyr−1), and providing a quarter of emission reductions planned by countries. Realizing and tracking this mitigation potential requires more transparency in countries’ pledges and enhanced science-policy cooperation to increase conﬁdence in numbers, including reconciling the ≈3 GtCO2eyr−1 difference in estimates between country reports and scientiﬁc studies. 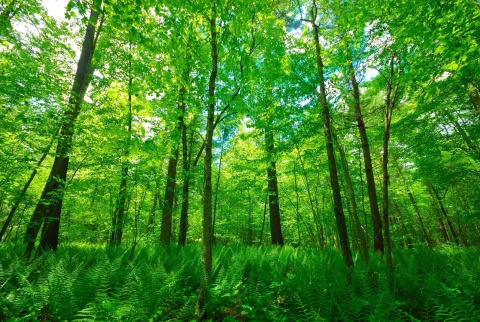