The Impacts of Oil Palm on Recent Deforestation and Biodiversity Loss

Strong demand for vegetable oil has led to a boom in the Indonesian and Malaysian palm oil industries since 1990. Typically planted in extremely large monoculture plantations, the crop has been implicated in biodiversity loss and human rights issues.

This article expands on a set of earlier scientific studies about the extent to which palm oil has replaced tropical forest. The earlier papers were vital in the campaigns run by NGOs to curb deforestation in the oil palm industry. The authors of this new paper say they seek to identify where oil palm has recently replaced tropical forests because this may best anticipate where future deforestation may occur.

Using a different approach from previous studies on the extent of palm oil-related deforestation, the authors looked at plantations in 4 regions across the world, up to the year 2013. Rather than attempting a true global analysis, they selected only a number of plantations per country, in five countries per region (the five with the highest recorded palm oil production). The authors note that ‘a fully random selection of sites based on age would have been prohibitively time consuming, if even possible with available satellite imagery and mapping algorithms.’ Therefore, they chose to look at specific individual sample sites with oil palm and found these by searching on Google Earth for clearly visible oil palm monocultures and confirming these sites, where possible, with news articles, geotagged photos, government and company records, or academic articles. Having selected these sites, they then examined with high resolution satellite data what proportion of the current plantation was previously forest, thereby establishing the rate of deforestation for oil palm at different points in time after 1990. They then multiplied their findings by total plantation area in the respective countries according to the FAO and scaled this up regionally using the same method.

The findings indicate high rates of deforestation since 1990 within oil palm plantations across a range of countries and regions. Of the 2013 area in the selected plantations which the study looked at, the following percentages were forested in 1990 in the different regions:

The underlying assumption of the work, and arguably a challengeable one, is that the trends observed in the sampled plantations are representative of all current oil palm planted area within that country and, even the region. There are several issues with this approach, which the authors do not discuss. Firstly, the study looks only at the five countries in each region which have the largest palm oil production. This biases towards countries with a greater history of oil palm production. This may mean, as in the case of, for example, Cameroon, that most of the sampled plantations were indeed planted on what was previously forest, but that the removal of forest had occurred long before 1990. In contrast, Uganda, an African country not included in the analysis, has recently seen the creation of its first industrial oil palm plantation, the majority of it replacing forest. This then means that the results found for Africa may be underestimated. Conversely, the non-random selection of plantations may have led the authors to select larger plantations which are likely to have replaced forest, whereas many of the smaller-scale farms, which would not have been included, might be more likely to have been planted on farmland.

The study also aimed to map the future vulnerability of forests to oil palm expansion based on a crop suitability model under a climate scenario and the locations of protected areas. However, the methodology was simplistic as it used very coarse spatial data and did not take into account all-important socio-political, commercial, and detailed landscape information. In particular, it did not into account the fact that the vast majority of international palm oil companies – from producers to distributors to users – have made ambitious commitments to eliminate deforestation from their supply chain and are monitored intensely by NGOs.

Palm oil is the most widely traded vegetable oil globally, with demand projected to increase substantially in the future. Almost all oil palm grows in areas that were once tropical moist forests, some of them quite recently. The conversion to date, and future expansion, threatens biodiversity and increases greenhouse gas emissions. Today, consumer pressure is pushing companies toward deforestation-free sources of palm oil. To guide interventions aimed at reducing tropical deforestation due to oil palm, we analysed recent expansions and modelled likely future ones. We assessed sample areas to find where oil palm plantations have recently replaced forests in 20 countries, using a combination of high-resolution imagery from Google Earth and Landsat. We then compared these trends to countrywide trends in FAO data for oil palm planted area. Finally, we assessed which forests have high agricultural suitability for future oil palm development, which we refer to as vulnerable forests, and identified critical areas for biodiversity that oil palm expansion threatens. Our analysis reveals regional trends in deforestation associated with oil palm agriculture. In Southeast Asia, 45% of sampled oil palm plantations came from areas that were forests in 1989. For South America, the percentage was 31%. By contrast, in Mesoamerica and Africa, we observed only 2% and 7% of oil palm plantations coming from areas that were forest in 1989. The largest areas of vulnerable forest are in Africa and South America. Vulnerable forests in all four regions of production contain globally high concentrations of mammal and bird species at risk of extinction. However, priority areas for biodiversity conservation differ based on taxa and criteria used. Government regulation and voluntary market interventions can help incentivize the expansion of oil palm plantations in ways that protect biodiversity-rich ecosystems. 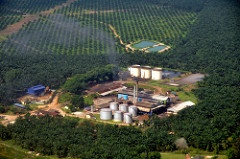