This paper sets out the results of a Life Cycle Assessment of a multispecies pasture rotation (MSPR) system on the White Oak Pastures farm in Georgia, US. It compares the carbon footprint and land area for producing beef, pork and poultry via the MSPR to literature estimates of the impacts of producing the same meats through a “conventional, commodity (COM) production system”.

The figure below illustrates the system that White Oak Pastures uses. It starts with degraded cropland and uses a succession of treatments that aim to regenerate the land: applying compost (produced on the farm) and hay (produced off-farm), seeding with grass, grazing with cattle and poultry at low densities (the poultry diet is supplemented by additional feed - maize and soy), followed by rotational grazing at higher stocking densities. The final grazing system incorporates cattle, sheep, goats, laying hens, guinea fowl, turkeys, ducks, geese, swine and rabbits.

Soil samples were taken from a chronosequence, i.e. a series of sites on White Oak Pastures that have been converted from degraded cropland to pasture at different times up to 20 years ago. This form of data collection does not provide a true time sequence. The figure below shows the soil carbon measured on the chronosequence sites. The data points show an upward trend, i.e. the longer the site has been operating under pasture, the higher the soil carbon generally is (soil health indicators also generally increased - see Table 3 of the paper). If a linear trendline is assumed, the increase is roughly equivalent to 2.3 Mg C ha-1 year-1. The discussion section of the paper addresses the possibility of the soil reaching a saturation point beyond which the concentration of soil carbon does not increase (as explained in our video summary of the FCRN report Grazed and Confused). However, although the paper’s data points could support a pattern of fast initial increase then slower subsequent increase in soil carbon,  the authors suggest that it may be an artifact of the particular management styles in the case study. They point to other literature to argue that particulate organic matter can be indefinitely accrued in soils and to support their questioning of the assumption that soil carbon becomes saturated in grasslands. The figure below shows land use for both systems. The MSPR uses roughly 2.5 times more land per kg of carcase weight than the conventional system. Note that it is not clear - because the study authors did not assess - how the MSPR performs in terms of soil health and carbon sequestration compared to other forms of grazing, cutting of sown grass, or ecosystem restoration without using livestock on the degraded cropland, since the only comparison made was between MSPR and conventional systems.

Nor does the paper compare the broader ecological implications - such as for plant and animal diversity - of the MSPR with these other possible approaches.

See also Table’s summary of the paper Impacts of soil carbon sequestration on life cycle greenhouse gas emissions in Midwestern USA beef finishing systems, by some of the same authors as this paper.

Regenerative agriculture is a newly codified approach to agriculture that emphasises reducing reliance on exogeneous inputs, as well as restoring and enhancing ecosystem services such as soil carbon (C) sequestration. These regenerative agriculture principles suggest that modern livestock systems can be redesigned to better capitalise on animals' ecological niche as biological up cyclers and may be necessary to fully regenerate some landscapes. One example is a multispecies pasture rotation (MSPR) system, which symbiotically stacks multiple animal production enterprises (i.e., chickens, cattle, sheep, and pigs) on one landscape. We conducted a whole-farm life cycle assessment (LCA) of an MSPR in the southeastern United States that was originally converted from degraded cropland. We compared the production outputs, greenhouse gas (GHG) emissions, land footprints, and soil health outcomes to a conventional, commodity (COM) production system of each respective species. Our 20-year MSPR chronosequence of soil C and other soil health indicators shows dramatic improvement since establishment, sequestering an average of 2.29 Mg C ha−1 yr−1. Incorporation of soil C sequestration into the LCA reduced net GHG emissions of the MSPR by 80%, resulting in a footprint 66% lower than COM. However, when comparing required land between the two systems for food production, MSPR required 2.5 times more land when compared to COM. Thus, while our model indicates that MSPR can simultaneously produce protein while regenerating land, a considerably greater land area is needed when compared to COM. Our results present an important yet paradoxical conclusion on land and food production balance. Should society prioritise an input-intensive, COM system that produces more food from a smaller yet degrading land base? Or, alternatively, should systems such as MSPR that produce less food on a larger, but more ecologically functional landscape be more highly prioritised? These complexities must be considered in the global debate of agricultural practice and land. Our results indicate MSPRs are a useful model for alternative livestock production systems with improved environmental outcomes, but in this study may present considerable land-use tradeoffs. 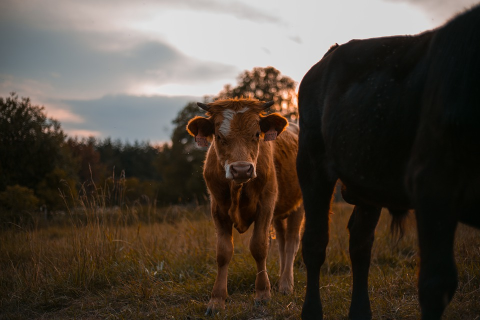