Recent research has shown that some foods have a considerably higher emissions-footprints than do others and that changes in average dietary consumption patterns towards lower-emissions foods, has potential as a climate change mitigation measure.

The two studies summarised here (authored by different teams of researchers), looking at the UK and Spain respectively, model the mitigation potential, and the distributional, and nutritional impacts of an emissions based food tax: one of the most commonly cited policy options proposed to stimulate changes in dietary consumption, towards lower-emissions foods.

In both studies, it was found that emissions-based food taxes are effective in modestly reducing food-related emissions, but that the burden of taxation falls disproportionately on lower socio-economic groups. For this reason, while potentially effective, these studies show that significant policy risks are also associated with emissions-based food taxes, which would need to be addressed through compensatory mechanisms, in order for them to be socially acceptable.

The UK study used a tax rate of £28.41/tCO2e and evaluated two scenarios, with one covering all UK food types, resulting in a very minor, 6.3% (−8.023 MtCO2e) reduction in food related emissions (or 1.5% of UK emissions), and another covering just high-emission food groups, resulting in an even smaller, 4.3% (−5.492 MtCO2e) reduction. The revenue from these taxes was calculated to reach £6.06 billion and £3.61 billion respectively.

Lower-income groups in the UK study, were found to be impacted the most in relative terms, because a larger proportion of their food expenditure is spent on emission intensive foods such as meat and dairy (even though they buy smaller absolute quantities), and because they also tend to buy cheaper products and therefore experience a larger proportional price increase. Additionally, for lower-income groups, a lower average weekly income provides fewer resources with which to absorb higher food prices.

In the Spanish study, in response to emissions-based food taxes, lower-income groups were found to respond by allocating a greater proportion of their expenditure to food (20%), than the rich (10%). Importantly, the welfare impact change from exempting low-emissions foods from the high carbon price, was found to be greatly lowered (0.7% vs 0.42% of household income), becoming comparable with that for the low carbon price scenario (0.35% of household income).

The findings with regard to the nutritional impacts of emissions-based food taxes, differed somewhat between studies. The UK study found that the impact of the tax on dietary quality for both scenarios, was mixed, with the positive health impacts from reducing the intake of fat, sugar, and salt, offset by a reduction in fibre, fruits, and vegetables, especially for lower-income groups.

On the other hand, the Spanish study found a notable reduction in cholesterol saturated fat, sugar, and protein intakes for all scenarios. Even though the high carbon price scenario resulted in a considerable reduction in fruit and vegetable consumption, this was nevertheless considered by the authors to still be beneficial overall, as saturated fat and protein are currently over-consumed in Spanish households (see Figure 1 from the study below). Interestingly, an increase in vegetable consumption, with only a small decrease in fruit consumption, resulted from the scenario where a higher carbon price of EURO 50/ton was applied only to high-emissions foods such as beef (ExeHT). This scenario therefore cut saturated fat and animal protein, while also increasing fibre intake, demonstrating that well designed exemptions from an emissions-based food taxes, can achieve not only reduce emissions but also can make diets healthier.

Agriculture and food production are responsible for a substantial proportion of greenhouse gas emissions. An emission based food tax has been proposed as one option to reduce food related emissions. This study introduces a method to measure the impacts of emission based food taxes at a household level which involves the use of data augmentation to account for the fact that the data record purchases and not consumption. The method is applied to determine the distributional and nutritional impacts of an emission based food tax across socio-economic classes in the UK. We find that a tax of £2.841/tCO2e on all foods would reduce food related emissions by 6.3 % and a tax on foods with above average levels of emissions would reduce emissions by 4.3 %. The tax burden falls disproportionately on households in the lowest socio-economic class because they tend to spend a larger proportion of their food expenditure on emission intensive foods and because they buy cheaper products and therefore experience relatively larger price increases.

Kehlbacher, A., Tiffin, R., Briggs, A., Berners-Lee, M. and Scarborough, P. (2016). The distributional and nutritional impacts and mitigation potential of emission-based food taxes in the UK. Climatic Change, pp.1-21.

Read the full article here (open access). Also see the similar research conducted by these researchers on the health impact of internalising the cost of carbon into food prices, combined with tax on sugar-sweetened beverages (here); on the impact that a UK tax on food related GHG emissions might have on chronic diseases (here); on valuing the health and environmental co-benefits of dietary change (here); and on the greenhouse gas impacts of different dietary choices (here, here, and here).

Mitigation policies have focused mainly on the energy and transport sectors, but recent studies suggest that food related measures can also deliver cost-effective emission reductions. This paper evaluates the implications of levying consumption taxes on food products in Spain based on their carbon footprint. Specific elasticities are estimated for the food demand system based on a dataset of around 20,000 households, using a demand system model. The results show that this policy can reduce emissions and, at the same time, help to change consumption patterns towards healthier diets. For the first time in the related literature, this paper also explores the distributional implications. The results show that carbon- based food taxation tends to be slightly regressive and can have more effect on specific social groups. However, that effect can be ameliorated if exemptions on some basic food products are introduced. 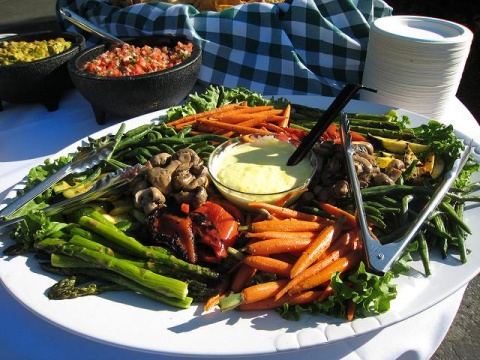