High yields realised by a pilot bubble-insulated ‘Food to Waste to Food’ growing system, while also cutting energy demand by 80%

This paper describes the operation of a bubble-insulated greenhouse system that recycles organic waste, through its anaerobic conversion into biogas and digestate, into inputs for new food. It reports that commercial crop yields were repeatedly matched and bettered, while an 80% reduction in heat energy demand and 95% reduction in CO2eq emissions was realised compared to conventional greenhouse production.

The novel integrated ‘Food to Waste to Food’ system is housed inside a greenhouse insulated by soap bubbles. The Norwegian-based prototype system utilises a digester, where food and garden waste are broken down by anaerobic digestion to produce biogas and digestate. The biogas heats then and provides electricity and CO2 for the system, while the digestate goes on to fertilise fresh vegetables and mushrooms. See the image below.

Because digestate was the only nutrient supply given to the crops, the authors have named their new system ‘digeponics’. They experimented with a range of different digestate treatments, which included mixing in varying amounts of garden compost, peat and earthworm treated compost (vermicompost). The bubble-insulated greenhouse is a type of greenhouse that uses soap bubbles as advanced thermal insulation in its walls and roof. Its climate control system employs devices and algorithms to carefully regulate circulation and heat accumulation. It demonstrates an 80% reduction of the heat energy demand compared conventional greenhouses, all of which can be supplied by the biogas produced.

The project shows promising indications that commercial vegetable growth may be possible using organic waste (food & garden) substrate and fertiliser. In some cases, this new method produced significantly higher yields than the controls based on commercial substrate and fertilisers. Furthermore, tomatoes produced using this method resulted in 95% less CO2eq emissions than those of conventional greenhouse production.

The authors identify some of the challenges they face before such a system can become commercially viable. These include further optimisation of digestate treatment methods and research into the economic and up-scaling issues faced in creating a system which is able to supply vegetables at reasonable prices for local consumption.


At urban locations certain challenges are concentrated: organic waste production, the need for waste treatment, energy demand, food demand, the need for circular economy and limited area for food production. Based on these factors the project presented here developed a novel technological approach for processing organic waste into new food. In this system, organic waste is converted into biogas and digester residue. The digester residue is being used successfully as a stand-alone fertilizer as well as main substrate component for vegetables and mushrooms for the first time - a ‘digeponics’ system - in a closed new low energy greenhouse system with dynamic soap bubble insulation. Biogas production provides energy for the process and CO2 for the greenhouse. With very limited land use highly efficient resource recycling was established at pilot scale.
In the research project it was proven that a low energy dynamic bubble insulated greenhouse can be operated continuously with 80% energy demand reduction compared to conventional greenhouses. Commercial crop yields were achieved based on fertilization with digestate; in individual cases they were even higher than the control yields of vegetables such as tomatoes, cucumber and lettuce among others. For the first time an efficient direct use of digestate as substrate and fertilizer has been developed and demonstrated.

Another summary of this paper’s results can be found here 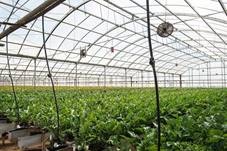