Of the practices investigated, peatland drainage is found to have the most disproportionate impact on emissions, accounting for 32% of cropland emissions while only producing 1.1% of crop kilocalories. It is argued that mitigation policies should be targeted specifically at locations where crops have both high emissions and high intensities.

The study  finds that the total of these global cropland GHG emissions amounts to approximately 1994 TgCO2e yr-1, or 4.5% of total anthropogenic emissions. About 48% of those emissions are from flooded rice, 32% from peatland cultivation and 20% from N fertiliser application. The top ten emitting crop varieties are found to account for 75% of the cropland emissions, with rice providing the most significant contribution. Emissions are found to be concentrated in Asia, with China, Indonesia and India combining to produce 51% of the total cropland emissions.

Since rice is a staple food for nearly half the world’s population, its high overall emissions contribution is not wholly surprising. However, it is also found to be the most GHG intensive of any of the major crops (0.63 Mg CO2e M kcal-1 production intensity). With rice consumption projected to increase dramatically over the coming years, the authors stress the need to carefully consider production techniques and the potential benefits and trade-offs of crop switching. See also this paper which we summarised which argued that the 'nutritional yield' of crops also need considering and showed that rice performs quite badly relative to other crops in its provision of important nutrients such as protein, iron and zinc.

The authors also express concern over the practice of peatland draining, which exposes carbon-dense peatland soils, and generates disproportionately large, sustained GHG emissions which are comparable, in long run, to those of deforestation. Indonesia is identified as a nation that is particularly reliant on crops grown on peat (33% of global cropland peat CO2e). The authors argue that mitigation policies should aim to eliminate the practise of peatland draining altogether.

The authors conclude by highlighting the utility of their data to policy makers who are trying to reconcile rapidly increasing crop demand with the need to address climate change. They propose that the spatially refined GHG emissions and intensity data can allow for the careful design of precision mitigation strategies targeted at the most GHG intensive locations. Such strategies could include farmer education through extension and outreach, corporate sustainability commitments, national food policies, and multilateral agreements. 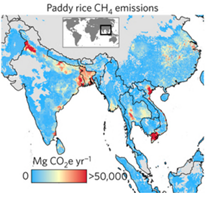