The growing role of methane (and agriculture) in anthropogenic climate change

This editorial piece in Environmental Research Letters highlights the fact that, as opposed to CO2 emissions, those of the powerful greenhouse gas methane are currently rising faster than at any point in the last twenty years. Around two-thirds of global emissions of methane are attributable to anthropogenic activities, with agriculture and related land use change identified as a main culprit.

The article is a short review paper which summarises current knowledge on rises in atmospheric methane concentrations, the surface sources and sinks of methane across the planet, and the potential for mitigation.

The authors note that in 2007, atmospheric methane concentrations have started to rise at a rate ten times that in 2000 to 2006. In 2015 it reached an annual average concentration of 1834 parts per billion. While different explanations have been proposed, there is no consensus scenario of methane sources and sinks that explains the atmospheric increase since 2007. Three main elements influencing the global methane budget have changed around this time:

Methane emissions are estimated to primarily arise from tropical sources (two thirds) and include both natural and anthropogenic sources. Much of these come from tropical wetlands.

Mitigation options for methane concentrations exist and could be a powerful option in the mitigation mix. Methane has both a high global warming potential and a short lifetime in the atmosphere in comparison to CO2; as such it can be a good tool to reduce climate change in the short term. Various coalitions to work on reducing methane emissions have already been created: these include the Global Methane Initiative and the Climate and the Clean Air Coalition which were supported by the G7 leaders in May 2016.

Some tried and tested mitigation options are:

(i) venting and flaring of methane in coal-mines

Other methods, such as alternative feeding strategies for cattle, are considered promising but need more research and cost-benefit analysis.

Unlike CO2, atmospheric methane concentrations are rising faster than at any time in the past two decades and, since 2014, are now approaching the most greenhouse-gas-intensive scenarios. The reasons for this renewed growth are still unclear, primarily because of uncertainties in the global methane budget. New analysis suggests that the recent rapid rise in global methane concentrations is predominantly biogenic-most likely from agriculture-with smaller contributions from fossil fuel use and possibly wetlands. Additional attention is urgently needed to quantify and reduce methane emissions. Methane mitigation offers rapid climate benefits and economic, health and agricultural cobenefits that are highly complementary to CO2 mitigation.

You can find the full paper here (open access). 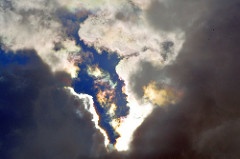