This paper estimates greenhouse gas emissions (GHGEs) associated with the food purchased by US households (based on survey data) and examines the links between food GHGEs and demographic factors. It suggests that education on the links between food and climate could be targeted at more educated and more affluent consumers, since their research shows (see below) that the these households have more GHGE-intensive dietary patterns.

Looking at GHGEs by food supply chain stage, the paper calculates that around two-thirds of GHGEs arise during the production and manufacturing stage, followed by retail (13%) and restaurants (12%), as shown below.

By product type, beef, pork and other red meat accounts for the largest fraction of GHGEs (21%), followed by fresh vegetables and melons (11%), cheese (10%) and milk, milk products and butter (7%).

Changes in diet have been proposed as one way to reduce carbon emissions from the food system. But evidence on the implications of changing to low carbon food choices for both diet quality and food affordability are limited in the U.S. The objective of this study was to (a) estimate greenhouse gas emissions (GHGEs) from U.S. household food purchases; (b) examine the source of GHGEs across U.S. food production industries and stages of the supply chain; and (c) show the association between GHGEs and spending by food categories and household sociodemographics. GHGEs from food expenditures made by households participating in the National Household Food Acquisition and Purchase Survey were calculated using Economic Input-Output Life Cycle Assessment. Results indicate that food purchases accounted for 16% of U.S. GHGEs in 2013 and average weekly household GHGEs were 71.8 kg carbon dioxide equivalents per standard adult. 68% of average weekly household GHGEs from food spending came from agriculture and food manufacturing stages of the food supply chain. Industries that produce animal proteins accounted for 30% of average weekly household GHGEs, the largest share of any food industry. Households generating the highest levels of GHGEs spent a significantly larger share of their food budget on protein foods compared to households generating lower levels of GHGEs. White households and those with higher education levels generated more GHGEs from food spending compared to non-white and less educated households. Overall these findings inform the ongoing debate about which diets or food spending patterns in the U.S. are best for mitigating GHGEs in the food system and if they are feasible for consumers to purchase. 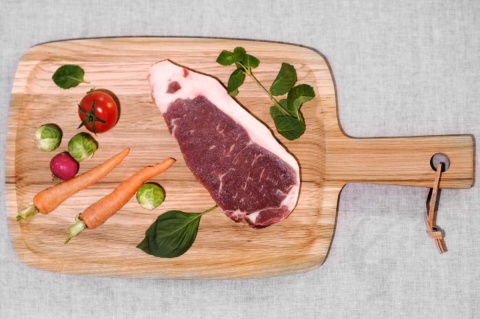