This paper, produced by the Centre for the Study of Existential Risk at the University of Cambridge, outlines a system that could produce animal feed with lower environmental impacts than conventional soybean production. The system combines LED lighting, indoor photobioreactors, atmospheric carbon capture and geothermal energy to produce an algae-based feed product.

The paper presents an overview of current livestock production, including the environmental consequences of producing soybeans as animal feed.

It then goes on to describe a system recently deployed at Hellisheiði geothermal power station in the Hengill area of Iceland. As illustrated in the figure below, geothermal energy is used to produce artificial light through LEDs and extract carbon dioxide from the atmosphere. The light and the carbon dioxide, together with fertilisers and water, are the inputs to a photobioreactor in which the algae Nannochloropsis oculata (which is suitable for inclusion in livestock diets) is cultivated.

Image: Figure 2, Tzachor. Integrated system outline (in place and operational to produce 10,500 kg of biomass per year; DAC is a pilot project).

The paper does not discuss whether Nannochloropsis oculata is suitable for direct consumption by humans, nor does it discuss the opportunity costs of using existing geothermal energy capacity for feed production versus other purposes (e.g. domestic electricity or water heating).

Population growth, an expanding middle-class, and a global shift in dietary preferences have driven an enduring demand for animal products. Since animal products are playing a vital role in human diets, their consumption is predicted to increase further. However, the great dependency of animal husbandry on global staple feed crop soybean; the environmental consequences of soybean production; and barriers for soy cropland expansion cast doubt on food system sustainability. The need to mitigate future demand for soy with other feed sources of similar nutritional profile, and thereby decouple food and feed production from ecological pressures, is compelling. Yet, the literature and science of sustainable agriculture is one of incremental improvements, featuring primarily, crop production intensification. A different, more profound approach to the design of feed systems is required to ensure sustainable food security. The question arises if alternative technologies exist to support such a design. This paper explores a particular novel configuration of four advanced technologies recently deployed in the region of Hengill, Iceland: light-emitting diode systems, advanced indoor photobioreactors, atmospheric carbon capture technology, and geothermal energy technology. In situ system analysis and data triangulation with scientific literature and data from independent sources illustrate the potential of these integrated technologies to produce algal-based animal feed. The analysis suggests that a highly sustainable soybean equivalent is technically attainable for feed purposes. The integrated system requires less than 1% of arable land and fresh water compared with soybean cultivation and is carbon negative. In addition, it provides a pesticide- and herbicide-free cultivation platform. This new configuration provides one pathway for the future of feed. 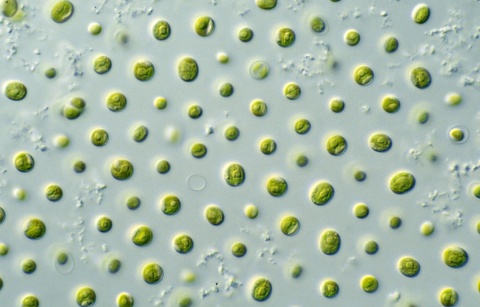