Frozen Food and Food Security in the UK

A new report from at Cranfield University suggests that increasing the production and consumption of frozen food in the UK can play a significant role in delivering the government’s 2020 and 2050 food security targets. The report, Frozen Food and Food Security in the UK, was produced by sustainability experts at Cranfield University on behalf of the British Frozen Food Federation (BFFF).

The researchers assessed a range of factors, such as waste reduction, increasing production, providing affordable nutrition and reducing the environmental impact of food production. They concluded that frozen food already contributes to food security in the UK and expanding its use could contribute significantly more.

Greenhouse gas emissions (GHGE), consumer cost and waste production for four of the most common shopping list items – cod, carrots, broccoli and potatoes – were calculated and compared with typical fresh and frozen supply chains throughout the year.

Read the executive summary of the report here.

The FCRN’s own report on food refrigeration, greenhouse gas emissions and the evolution of refrigeration dependence can be found here. 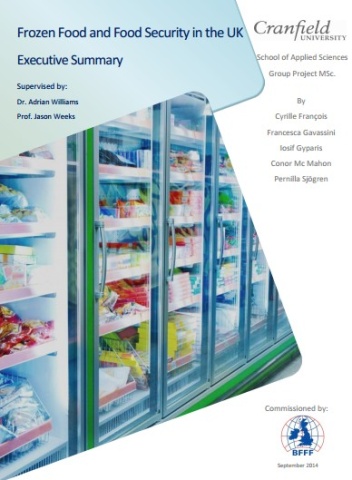