This report by the African Centre for Biodiversity argues that the Farm Input Subsidy Programmes (FISPs) have not achieved their intended goals in a number of African countries where they have been implemented. In its highly critical analysis the report argues that they consume large parts of agricultural and even national budgets and are largely ineffective social transfer schemes that create dependency.

The report also argues that the motivation for these programmes is aligned to non-economic rationales for subsidy use; i.e. enhancing food security and reducing poverty and that in many countries they are used to gain political favour. The report shows that ten African governments have spent more than US$ 1 billion, close on 30% of their agricultural budgets, on large-scale farm input subsidy programmes (FISPs) since 2000. The programmes, providing between 30–100% subsidies on the price of fertiliser and seed (normally hybrid maize), aim to reduce food insecurity and reduce rural poverty. Of the 15 countries that comprise the Southern African Development Community (SADC), Botswana and Lesotho offer universal input subsidy schemes, and Malawi, Mauritius, Mozambique, Namibia, Swaziland, Tanzania, Zambia and Zimbabwe provide targeted, large-scale programmes. The remaining countries, including South Africa, practice ad hoc subsidisation.

Country examples from the report:

The conclusion of this report is thus that FISPS do not help build the resilient, sustainable farming and food systems that are necessary in a world facing diverse ecological, economic and social challenges. The authors argue that a transition to agro-ecology is required as a matter of urgency, to bring about the sustainable food systems of the future, formed through the collective, inclusive and democratic co-generation of the knowledge held by farmers, consumers and African governments.

You can read the full report here. 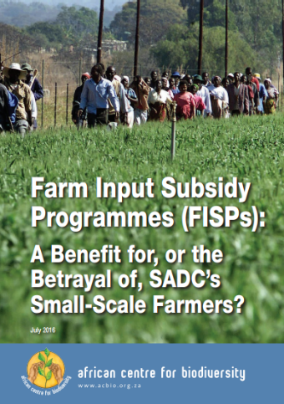