The effects of naming and shaming campaigns: the case of the Dutch factory farmed chicken

One Dutch animal rights NGO and a growing public antipathy to the extremes of industrial animal farming have caused several major supermarkets in the Netherlands to stop selling meat from fast-growing chickens.

This blogpost details how in December 2015, after three years of campaigning action against the poultry industry, the amount of this low-welfare chicken meat sold on Dutch shelves was reduced by half. Organisation ‘Wakker Dier’ ran a two-million euro project in which they targeted consumers and retailers with explicit TV, billboard and newspaper advertisements.

The campaign called the fast-growing chicken species ‘plofkip’ – a ‘bursting chicken’ – cleverly hinting both at the explosive growth of the animals as well as their occasional inability to walk due to their high weight. Copying the marketing style of Albert Heijn, the Dutch equivalent to Sainsbury’s, they emphasised a range of welfare and food safety issues as well as the very rapid rate of growth – bred to grow from a 50g chick to a 2kg chicken in just six weeks (see figure below). The catchy word ‘plofkip’ soon became a much used phrase, both amusing and horrifying consumers, leading some to directly pressure their supermarkets along with Wakker Dier.

In 2012, multinational Unilever was the first to respond to Wakker Dier’s calls and eliminate ‘plofkip’ meat from their products. Instead, slower growing breeds of poultry were used, antibiotics use reduced and day/night rhythms in the barns were re-established. The decision by the country’s primary retailers three years later spells a major change for chicken production in the Netherlands: for the first time in decades, the price of a meat product will increase rather than decrease.

Above: Advertisement by NGO Wakker Dier comparing an organic chicken to a ‘plofkip’, stating: ‘95% of all chickenmeat sales are ‘plofkip’. These animals can sometimes hardly walk.’

While the chicken meat which replaces the ‘plofkip’ is arguably produced in a more animal-friendly manner, Wakker Dier still believes that there is room for further improvements, especially with regards to barn space per chicken. Furthermore, while poultry consumed at home will be produced differently, that intended for export is not. Currently, the Netherlands has more chickens per surface area than any other nation in the world: in 2014, over half a billion broiler chickens were killed, of which around two thirds were for export. Nonetheless, this story highlights the power of NGOs and consumers to change food production systems at a meaningful scale, given the right conditions and clever marketing tactics. 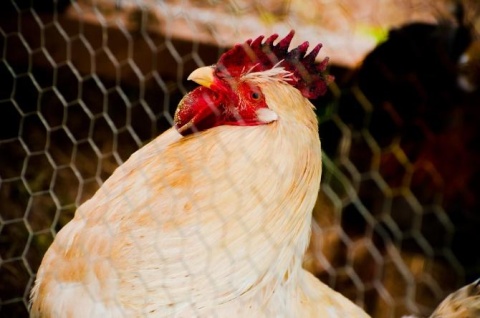