Domino effect could cause “Hothouse Earth”

Researchers have warned that a cascade of positive feedback loops could push global temperatures into a “Hothouse Earth” state for millennia, even if human greenhouse gas emissions are reduced. Some systems, such as ice sheets, forests and permafrost, could pass a temperature tipping point beyond which they rapidly become net contributors to climate change. If one is set off, the warming produced could trigger the remaining tipping points, like a line of dominoes.

As shown in the figure below, the temperature threshold varies by system. Ice sheets might pass a climate tipping point at 1°C - 3°C, while permafrost might not pass a tipping point until 5°C of climate change. However, there is uncertainty over what the exact threshold temperatures might be.

The authors state that, “The impacts of a Hothouse Earth pathway on human societies would likely be massive, sometimes abrupt, and undoubtedly disruptive,” and call for “a coordinated, deliberate effort by human societies to manage our relationship with the rest of the Earth System”.

We explore the risk that self-reinforcing feedbacks could push the Earth System toward a planetary threshold that, if crossed, could prevent stabilization of the climate at intermediate temperature rises and cause continued warming on a “Hothouse Earth” pathway even as human emissions are reduced. Crossing the threshold would lead to a much higher global average temperature than any interglacial in the past 1.2 million years and to sea levels significantly higher than at any time in the Holocene. We examine the evidence that such a threshold might exist and where it might be. If the threshold is crossed, the resulting trajectory would likely cause serious disruptions to ecosystems, society, and economies. Collective human action is required to steer the Earth System away from a potential threshold and stabilize it in a habitable interglacial-like state. Such action entails stewardship of the entire Earth System—biosphere, climate, and societies—and could include decarbonization of the global economy, enhancement of biosphere carbon sinks, behavioral changes, technological innovations, new governance arrangements, and transformed social values. 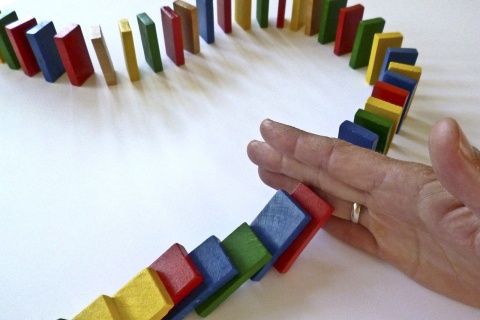