The figure below shows the first scenario: sustained emissions of either CO2 or CH4 at a constant rate for 200 years. In the case of CH4, the constant rate of emissions leads (after a few decades) to a new, constant atmospheric concentration level of CH4. Radiative forcing (i.e. the degree to which greenhouse gases affect the Earth’s energy balance) lags slightly behind concentration, and temperature increases rapidly at first but more slowly later on. In contrast, constant emissions of CO2 lead to almost linear increases in CO2 concentration, forcing and temperature.

Image: Lynch et al., Figure 1, A step change to sustained emissions of CH4 (top row, orange) and CO2 (bottom row, purple), and resulting impacts on atmospheric concentration, radiative forcing and temperature. For CH4 forcing, the dotted line shows forcing from methane alone, but the total forcing impact (solid line), is greater than this as a result of the ozone and stratospheric water vapour produced as methane breaks down. Temperature change is modelled from total forcing.

The next scenario shows the impacts of constant emissions of either CH4 or CO2 followed by a steep decline. For CH4, reducing emissions causes a decline in concentration and forcing, leading to a one-off cooling of the climate relative to the elevated baseline. For CO2, the fall in emissions only holds temperature to the point that it has already reached, leading to no further warming.

Image: Lynch et al., Figure 2, Impacts on atmospheric concentration, radiative forcing and temperature for a step change to sustained emissions for 50 years, followed by a decline to 0 emissions over the following 50 years for CH4 (top row, orange) and CO2 (bottom row, purple).

Image: Lynch et al., Figure 4, A demonstration of (A) a step-change to sustained CH4 emissions for 50 years followed by a decline to 0 emissions over the following 50 years, and (B) corresponding annual CO2-equivalent emissions using GWP100 or GWP* (red and blue lines, respectively), followed by (C) the warming resulting from those CH4 emissions (dashed orange line) overlaid with cumulative GWP100 and GWP* CO2-equivalent emissions (solid red and blue lines, respectively).

“Using GWP100 to direct climate change mitigation strategy could be unfair, inefficient, and dangerous. Unfair, as it does not provide a clear link between emissions and climate change contribution, and could lead to an expectation that some actors (long-term methane emitters) have to undo their past warming, while others (CO2 emitters) merely have to limit further temperature increases. Inefficient, as it would overstate the level of action needed to offset long-term sustained methane emissions, while simultaneously undervaluing the potential short-term benefits of reducing these methane emissions. Dangerous, as it can greatly understate the impacts of increasing methane emissions, and obscure the fundamental need for net-zero CO2 emissions as soon as possible, regardless of what mitigations are made to shorter-lived climate pollutants.”

They also argue that basing mitigation strategies on GWP100 could erode trust in climate policies, since GWP100 fails to accurately reflect warming impacts.

The atmospheric lifetime and radiative impacts of different climate pollutants can both differ markedly, so metrics that equate emissions using a single scaling factor, such as the 100-year Global Warming Potential (GWP100), can be misleading. An alternative approach is to report emissions as 'warming-equivalents' that result in similar warming impacts without requiring a like-for-like weighting per emission. GWP*, an alternative application of GWPs where the CO2-equivalence of short-lived climate pollutant emissions is predominantly determined by changes in their emission rate, provides a straightforward means of generating warming-equivalent emissions. In this letter we illustrate the contrasting climate impacts resulting from emissions of methane, a short-lived greenhouse gas, and CO2, and compare GWP100 and GWP* CO2-equivalents for a number of simple emissions scenarios. We demonstrate that GWP* provides a useful indication of warming, while conventional application of GWP100 falls short in many scenarios and particularly when methane emissions are stable or declining, with important implications for how we consider 'zero emission' or 'climate neutral' targets for sectors emitting different compositions of gases. We then illustrate how GWP* can provide an improved means of assessing alternative mitigation strategies. GWP* allows warming-equivalent emissions to be calculated directly from CO2-equivalent emissions reported using GWP100, consistent with the Paris Rulebook agreed by the UNFCCC, on condition that short-lived and cumulative climate pollutants are aggregated separately, which is essential for transparency. It provides a direct link between emissions and anticipated warming impacts, supporting stocktakes of progress towards a long-term temperature goal and compatible with cumulative emissions budgets.

Read the full paper here. See also the Foodsource building block Agricultural methane and its role as a greenhouse gas. 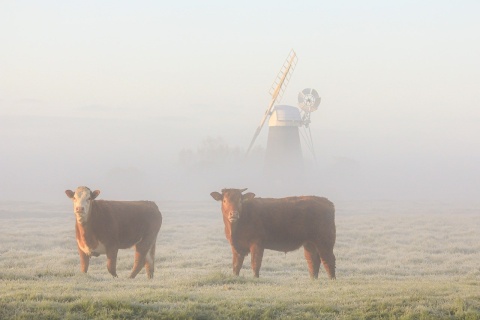