Dairy calves are natural optimists or pessimists, just like us

A new study shows that individual dairy calves have a tendency to be pessimistic or optimistic, with more fearful calves tending to be more pessimistic.

‘Judgement bias’ refers to an individual’s tendency to form positive or negative expectations in a situation where the outcome is uncertain - in others words, pessimism or optimism. This study aimed to assess whether individual dairy calves showed levels of judgement bias that are consistent over time, and whether these levels are associated with more conventionally assessed personality traits.

Judgement bias was assessed using a spatial learning task. Calves were trained to approach a bottle on one side of the apparatus (rewarded with milk in the bottle) and to not approach an empty bottle on the other side of the apparatus (mildly punished with a puff of air in the face). The behaviour of the calves was then tested (when the calves were 25 and 50 days old) when empty bottles were placed at three intermediate locations. The paper does not appear to state whether the calves could see whether the bottles were empty or not.

Personalities were measured according to various tests, starting at days 30 and 53. The results of these tests were processed using Principal Component Analysis to extract two main components, the first being labelled ‘fearfulness’ and the second ‘sociability’ by the researchers.

The results show that the animals that make the most pessimistic judgements when exposed to bottles in the ambiguous positions were also the most fearful animals. Sociability did not appear to affect judgement bias. The fearfulness and sociability of individual dairy calves appear to be consistent over time.

These results are important because pessimistic animals may be less likely to take advantage of interventions aimed at improving their welfare, e.g. environmental enrichment. On the other hand, optimistic animals may suffer when ambiguous situations do not lead to a reward, becoming frustrated.

Animals that experience situations likely to induce negative emotions show changes in judgment associated with pessimism. Few studies have focused on whether animals express stable differences in pessimism and whether these differences are related to personality traits. The first aim of this study was to explore if dairy calves are consistent over time in making judgments under ambiguous situations. Our second aim was to determine whether individual differences in judgment bias are related to conventional personality traits assessed using four standardized tests (Open field, Novel object, Human reactivity and Social motivation test). We subjected animals to two sessions of judgment bias and personality trait tests at 25 and 50 d of age. Individual differences in judgment bias were consistent over time with some animals persistently making more pessimistic choices compared to others. Two main dimensions of personality (Fearfulness and Sociability), obtained through principal component analysis, were also highly consistent over time. Pessimism was related to fearfulness, with more fearful calves making more pessimistic judgments. We conclude that dairy calves differ in the way they perceive and react to ambiguity and that this relates to individual differences in fearfulness.

Read the full article here. See also the Foodsource building block What is animal welfare? and the chapter Focus: the difficult livestock issue. 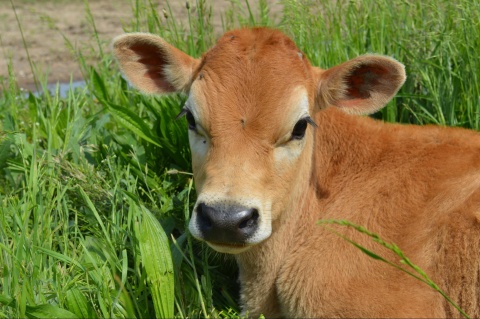