Cultivated meat moves one step closer to sale in the US

The United States Food & Drug Administration (FDA) has completed its first pre-market consultation for a food product made from cultivated animal cells. The cultivated chicken product, made by UPSIDE Foods, still has to pass further approval stages before it can be sold to consumers in the US, including inspection of the manufacturing facilities by the United States Department of Agriculture Food Safety and Inspection Service. The process described in the consultation documents uses genetic engineering, antibiotics and bovine serum at various stages, although antibiotics are not used in the main cell growth and differentiation phases.

In a letter to UPSIDE Foods, the FDA said (emphasis added):

“Based on the information UPSIDE has presented to FDA, as well as other information available to the agency, we did not identify a basis for concluding that the production process as described in CCC 000002 would be expected to result in food that bears or contains any substance or microorganism that would adulterate the food. We have no questions at this time regarding UPSIDE’s conclusion that foods comprised of or containing cultured chicken cell material resulting from the production process defined in CCC 000002 are as safe as comparable foods produced by other methods.”

The FDA has also published a 23-page memo outlining its assessment of the evidence provided by UPSIDE Foods, as well as UPSIDE Food’s 104-page description of its manufacturing process. The documents discuss issues such as the process used to isolate the initial animal cells; monitoring of the process to detect any contamination, e.g. with viruses; maintenance of sterile conditions in bioreactors; and the substances used during the cell culture process.

The process involves establishing an “immortal” cell line, which means the cells extracted from a chicken or an egg become able to divide and replicate more times than is usual. The method involves “cisgenic engineering”, i.e. genetic engineering that does not transfer genes between species.

In this case, the cells are modified to express the chicken TERT protein, which maintains the length of cell telomeres. Normally, telomeres become shorter with each cell division, limiting the number of times cells can replicate - in humans, this is known as the Hayflick limit and it is thought to determine our maximum lifespan. As the FDA notes in footnote 7 of page 7, dysfunctional regulation of telomeres in human cells is sometimes linked to the formation of tumours. Addressing the hypothetical risk that consuming the immortalised cells could be hazardous, UPSIDE argues (page 60) and the FDA accepts that the cells would not be able to grow after leaving the bioreactor, and furthermore that cooking and digestion would break down the TERT protein, and that any TERT protein that somehow was not broken down would in any case not be in the right place in the body to modify the activity of human cells.

Note that the description of the cell line establishment process on the UPSIDE Foods website is worded - “...our team selects ideal cells for developing a commercial cell line. The winning cells are chosen based on their ability to produce high-quality meat and grow predictably and consistently” - in a way that implies that only passive selection of suitable cells is used, as opposed to the active modification of gene expression that appears to be used.

The FDA concludes (page 17) “No information presented by the firm or otherwise available to us indicated any mechanism by which this cellular material, once rendered non-living, heated, consumed, and digested, would retain any replicative capacity or the ability to induce replicative capacity in living cells exposed to this material.”

According to the documents, the cell culture process does not use antibiotics or antifungals during the proliferation or differentiation phases (respectively, for increasing the number of cells from the initial cell line, and for turning those cells into muscle cells), but it does use them during the initial establishment of the cell lines. See also our summary of a Good Food Institute blog post on antibiotic use in cell culture.

The process does appear to use bovine serum, a non-vegetarian product which is extracted from the blood of cattle foetuses, as does the only cultivated meat product available for sale at the time of writing (in Singapore - see our coverage here). The UPSIDE Foods website states “We have already developed processes that do not require FBS [foetal bovine serum], and we are working to phase out the use of all animal components altogether. We aim to bring animal component-free products to market as soon as possible.”

The nutritional composition of the cultivated chicken is compared to that of conventional chicken. Both have similar levels of protein and amino acids, while the UPSIDE product has higher levels of some components (including iron, potassium, phosphorus, folate and cholesterol).

Media coverage and reactions include:

Read the FDA’s announcement of 16 November 2022 here. Further related resources can be found at the FDA page Human Food Made with Cultured Animal Cells. See also the TABLE explainer What is ecomodernism? 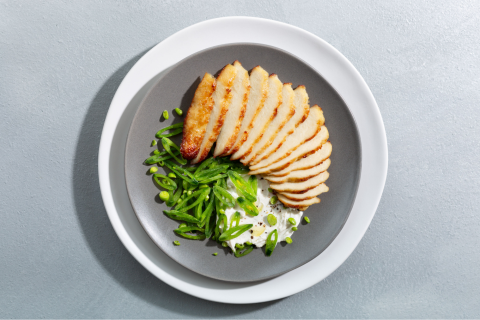