This is a crisis: The age of environmental breakdown

Human-induced environmental change could lead to the collapse of social and economic systems, according to this report from the UK think-tank IPPR, which argues that policymakers must shift their understanding of the scale and impacts of environmental breakdown and the need for transformative change.

The report points out that environmental destabilisation is reaching critical levels, as global vertebrate populations have fallen by 60% since the 1970s, topsoil is being lost at 10 to 40 times the rate of natural replenishment, 30% of the world’s arable land has become unproductive due to erosion since the mid-20th century, atmospheric carbon dioxide levels are at 405 ppm (higher than the limit of 350 ppm at which dangerous destabilisation of the climate may occur), and ocean acidity is damaging marine organisms and ecosystems.

The report argues that policymakers do not generally understand the potential impacts of environmental breakdown on societies and economies, including economic instability, large-scale involuntary migration, conflict and famine.

In response to these threats, the report calls for two major transformations of our socioeconomic systems:

Read the full report, This is a crisis: Facing up to the age of environmental breakdown, here and read a short summary here (PDF link). See also the Foodsource resource What is the likely human impact? 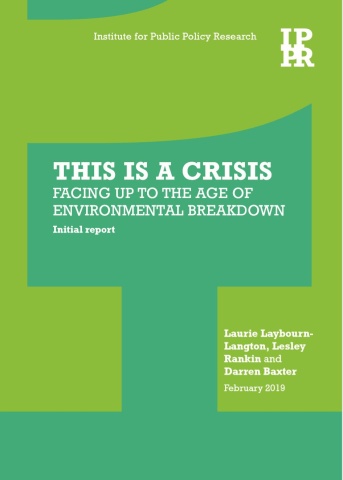