This paper uses temperature and precipitation projections across the ranges of over 30,000 species on land and in water to estimate when each species will be exposed to dangerous climate conditions. It predicts that most species within a given assemblage (group of species within a habitat) will encounter inhospitable climate conditions at the same time as each other (e.g. several species might have a similar upper limit on the temperature that they are able to cope with), meaning that disruption of the overall assemblage is likely to be abrupt.

The figure below shows that the percentage of assemblages predicted to undergo an abrupt, high-magnitude exposure event (defined as more than 20% of its species being exposed to climate conditions beyond their niche in a single decade) rises as the global mean temperature rises. If the climate change can be limited to 2°C, in line with the Paris Agreement, less than 2% of assemblages would undergo these events. At 4°C of warming, however, 15% of assemblages would be severely and abruptly disrupted.

Image: Figure 3.e., Trisos et al. The percentage of species assemblages projected to experience high-magnitude and abrupt assemblage exposure (more than 20% of species exposed in a single decade) as a function of global mean temperature increase relative to pre-industrial levels (1850–1900). ‘Current policy pledges’ refers to a scenario in which countries implement their current nationally determined contributions to 2030 and make no further emissions reductions.

According to the paper, assemblages in the tropics are at greatest risk because species are already likely to be living in conditions close to their maximum tolerable temperature, and thus will be less likely to adapt to warming temperatures compared to species outside of the tropics.

As anthropogenic climate change continues the risks to biodiversity will increase over time, with future projections indicating that a potentially catastrophic loss of global biodiversity is on the horizon. However, our understanding of when and how abruptly this climate-driven disruption of biodiversity will occur is limited because biodiversity forecasts typically focus on individual snapshots of the future. Here we use annual projections (from 1850 to 2100) of temperature and precipitation across the ranges of more than 30,000 marine and terrestrial species to estimate the timing of their exposure to potentially dangerous climate conditions. We project that future disruption of ecological assemblages as a result of climate change will be abrupt, because within any given ecological assemblage the exposure of most species to climate conditions beyond their realized niche limits occurs almost simultaneously. Under a high-emissions scenario (representative concentration pathway (RCP) 8.5), such abrupt exposure events begin before 2030 in tropical oceans and spread to tropical forests and higher latitudes by 2050. If global warming is kept below 2 °C, less than 2% of assemblages globally are projected to undergo abrupt exposure events of more than 20% of their constituent species; however, the risk accelerates with the magnitude of warming, threatening 15% of assemblages at 4 °C, with similar levels of risk in protected and unprotected areas. These results highlight the impending risk of sudden and severe biodiversity losses from climate change and provide a framework for predicting both when and where these events may occur. 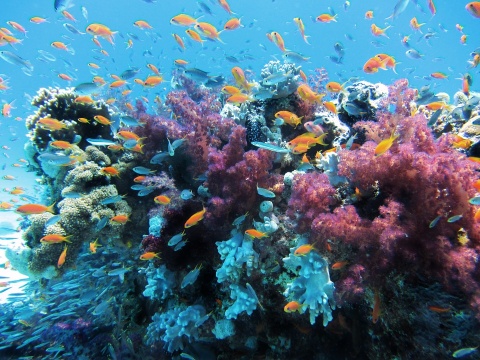