This paper by researchers in Peru and Spain recognises the as yet uninvestigated potential for developing countries, such as Peru, to mitigate their greenhouse gas (GHG) emissions by changing dietary patterns, given that food represents a high proportion of household expenditure. The study employed Life Cycle Assessment to analyse the impacts of 47 Peruvian diet profiles.

In the introduction, the authors note that despite its up-and-coming food sector, Peru is still home to a great deal of poverty and undernourishment. The average diet revolves around a non-diverse group of staples (wheat, rice and potatoes), is highly animal product based, and is largely lacking in fruit and vegetables. Peru was one of the first countries to ratify the Paris accord, which the authors attribute partly to the threat climate change poses to Peru’s staple crops. Despite this, the authors report, there is very little data relating food and GHG emissions available for Peru, and it is this gap which the paper seeks to address. The stated aims of the research were to calculate the GHG emissions of diets from different geographical and socio-economic contexts in Peru, and to link these findings to socio-economic trends in Peruvian society, the aim being to inform GHG mitigation and food security policy.

As available food consumption data was limited to urban locations in Peru, the authors confined their analysis to cities. 47 diet scenarios were constructed, agglomerating average diets in multiple cities, socio-economic quintiles and education. Socio-economic quintiles were based on household expenditure, with Q1 being the lowest and Q5 being the highest. For education level, the possession (or not) of a university degree by the head of the household was used as an indicator. Food prepared and consumed within the home was considered in devising the dietary scenarios, while food consumed away from the home (FAFH) was additionally incorporated in the LCA analysis for the geographical and socio-economic diet scenarios. Food loss and waste was accounted for using FAO estimates. Using LCA and data from previous studies, the study was able to determine the impact (as global warming potential, measured in equivalent metric tons of CO2, t CO2eq) of over 95% of the foods included in the diet scenarios. The details of the LCA parameters and system boundaries are given in the Materials and Methods section of the paper.

The authors provide an honest and detailed assessment for the assumptions and limitations of their work, including the exclusion from the analysis of a particular remote city, the lack of accounting for imports and exports, and the inclusion in the study of only direct, not indirect land use change. They also provide details of their uncertainty analysis.

The authors note that differences in impact between cities, regions and socio-economic quintiles are due not only to different dietary patterns (i.e. consumption of higher or lower impacting foods) but also to differences in caloric intake. The city with the highest per capita impacts also has the highest rate of overweight and obesity (although this was not found to be a trend all the cities). The authors briefly mention nutrition (although as it is to be the subject of another paper out of the same study, they do not elaborate extensively), and argue that policy-making in Peru to improve nutrition should include analyses of GHG emissions and other impacts. At a global level, the authors note with interest that Peruvian dietary GHG emissions are lower than those of most developed countries, being in line with the impacts of vegetarian or vegan diets from those countries, despite similar proportional contributions of animal products. They attribute the difference, therefore, to lower caloric intake.

By way of making recommendations to reduce diet associated GHG emissions in Peru, the authors suggest that thoughtful substitution of food - replacing high impact components of the diet with low impact ones - could be highly effective. They use the example of quinoa, which is produced in the Andes, is high in protein, has relatively low GHG impact, and is currently not a substantial part of the Peruvian diet. They estimate that if 20% of beef-based protein consumption were to be replaced by protein-equivalent quinoa consumption, GHG emissions could be reduced by ~30 kg CO2eq per person per year - close to a million tons CO2eq per year for the whole of Peru.

The authors conclude that their study may help inform policy decisions to reduce food-related GHGs in Peru, and reiterate the high potential for food substitutions and reducing food loss/waste to help achieve this, but recognise that these efforts may be counteracted by increased meat consumption by an increasingly wealthy populace, increased population size, and the spread of cattle ranches.

Food consumption accounts for an important proportion of the world GHG emissions per capita. Previous studies have delved into the nature of dietary patterns, showing that GHG reductions can be achieved in diets if certain foods are consumed rather than other, more GHG intensive products. For instance, vegetarian and low-meat diets have proved to be less carbon intensive than diets that are based on ruminant meat. These environmental patterns, increasingly analyzed in developed nations, are yet to be assessed in countries like Peru where food purchase represents a relatively high percentage of the average household expenditure, ranging from 38% to 51% of the same. Therefore, food consumption can be identified as a potential way to reduce GHG emissions in Peru. However, the Peruvian government lacks a specific strategy to mitigate emissions in this sector, despite the recent ratification of the Paris Accord. In view of this, the main objective of this study is to analyze the environmental impacts of a set of 47 Peruvian food diet profiles, including geographical and socioeconomic scenarios. In order to do this, Life Cycle Assessment was used as the methodological framework to obtain the overall impacts of the components in the dietary patterns observed and primary data linked to the composition of diets were collected from the Peruvian National Institute for Statistics (INEI). Life cycle inventories for the different products that are part of the Peruvian diet were obtained from a set of previous scientific articles and reports regarding food production. Results were computed using the IPCC 2013 assessment method to estimate GHG emissions. Despite variations in GHG emissions from a geographical perspective, no significant differences were observed between cities located in the three Peruvian natural regions (i.e., coast, Andes and Amazon basin). In contrast, there appears to be a strong, positive correlation between GHG emissions and social expenditure or academic status. When compared to GHG emissions computed in the literature for developed nations, where the average caloric intake is substantially higher, diet-related emissions in Peru were in the low range. Our results could be used as a baseline for policy support to align nutritional and health policies in Peru with the need to reduce the environmental impacts linked to food production.

Vázquez-Rowe, I., Larrea-Gallegos, G., Villanueva-Rey, P., and Gilardino, A. (2017). Climate change mitigation opportunities based on carbon footprint estimates of dietary patterns in Peru. PloS one, 12(11), e0188182.

To see the large range in estimated food-related emissions per capita in different countries and for different diets, see the following papers:

Dietary greenhouse gas emissions of meat-eaters, fish-eaters, vegetarians and vegans in the UK

Exploring dietary guidelines based on ecological and nutritional values: A comparison of six dietary patterns

For more articles on this topic, see our research library section on sustainable healthy diets here. 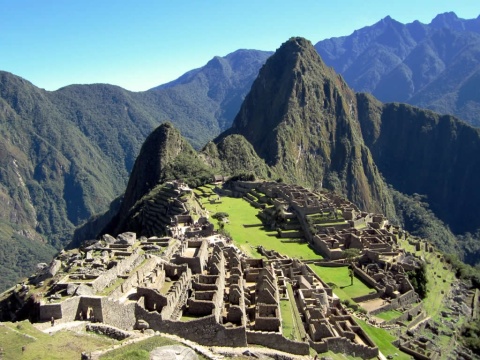