Carbon Emissions from Tropical Deforestation Could be Halved within Five Years

The paper argues that achieving a goal of reducing deforestation by 50 percent by 2020 remains possible but is difficult.  It estimates that achieving such a cut would keep 1.135 billion tons of carbon out of the atmosphere.

Brazil still ranks first among all tropical countries for carbon emissions from tropical deforestation, but the paper shows that the country has managed to reduce Amazon deforestation by nearly 80 percent while at the same time increasing its agricultural production.  According to this research, this change of direction has been made possible by a combination of public policy changes, transparency, improved law enforcement and voluntary actions in the private sector.

The paper also provides an overview of total “pantropical” emissions and shows that Brazil's emissions from gross deforestation accounted for 20 percent of the total from tropical countries in 2012 - a significant decrease from the highest level of 69 percent in 2003. However, it finds that even though Brazil has reduced emissions by over a billion tonnes of carbon annually between 2004 and 2009, these major reductions have been largely offset by increases in deforestation in other tropical forest countries.

With the ambition of providing more accurate and consistent estimates of tropical forest carbon emissions, the paper uses new satellite based data to measure progress. The research has generated a high resolution data set of so-called pantropical carbon density.

Halving carbon emissions from tropical deforestation by 2020 could help bring the international community closer to the agreed goal of <2 degree increase in global average temperature change and is consistent with a target set last year by the governments, corporations, indigenous peoples organizations and non-governmental organizations that signed the New York Declaration on Forests (NYDF). We assemble and refine a robust dataset to establish a 2001-2013 benchmark for average annual carbon emissions from gross tropical deforestation at 2.270 Gt CO2 y−1. Brazil did not sign the NYDF, yet from 2001-2013 Brazil ranks first for both carbon emissions from gross tropical deforestation and reductions in those emissions – its share of the total declined from a peak of 69% in 2003 to a low of 20% in 2012. Indonesia, an NYDF signatory, is the second highest emitter, peaking in 2012 at 0.362 Gt CO2 y−1 before declining to 0.205 Gt CO2 y−1 in 2013. The other 14 NYDF tropical country signatories were responsible for a combined average of 0.317 Gt CO2 y−1, while the other 86 tropical country non-signatories were responsible for a combined average of 0.688 Gt CO2 y−1. We outline two scenarios for achieving the 50% emission reduction target by 2020, both emphasizing the critical role of Brazil and the need to reverse the trends of increasing carbon emissions from gross tropical deforestation in many other tropical countries that, from 2001 to 2013, have largely offset Brazil's reductions. Achieving the target will therefore be challenging, even though it is in the self-interest of the international community. Conserving rather than cutting down tropical forests requires shifting economic development away from a dependence on natural resource depletion toward recognition of the dependence of human societies on the natural capital that tropical forests represent, and the goods and services they provide.

Read the full paper here and see coverage on a number of new research papers on deforestation here, produced by the Woods Hole Research Center (WHRC) – an independent research institute with the mission to advance scientific discovery and seek science-based solutions for the world’s environmental and economic challenges through research and education.

We would also like to highlight a very relevant recent blog-post which discusses new research exploring the links between deforestation, livestock and GHGs in Brazil.

See more in the research library keyword categories on deforestation, GHG emissions trends and GHG impacts and mitigation and lastly the overarching categories on governance and policy as well as climate change mitigation. 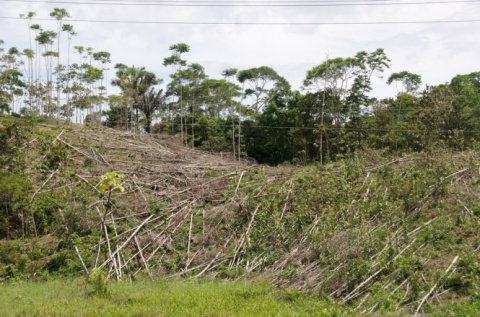