A carbon tax applied across the whole economy, including agriculture, could put more people at risk of hunger (in terms of dietary energy availability) than climate change itself, according to a recent paper.

The models in the paper calculate that, in 2050, a “middle-of-the-road” socio-economic scenario would cause 2 to 56 million more people to be at risk of hunger (compared to a baseline scenario in which the climate stays at today’s conditions), due to climate impacts. However, if climate impacts are reduced through mitigation, 0 to 170 million more people (depending on the socio-economic scenario) are at risk of hunger, mainly because of the effects of mitigation.

The authors state, “Our findings should not be interpreted to downplay the importance of future GHG emissions mitigation efforts, or to suggest that climate policy will cause more harm than good in general.” Instead, the paper says, mitigation policies should take food security into consideration, for example by designing complementary “safety nets” or through transferring resource-efficient agricultural technologies to low-income countries.

Food insecurity can be directly exacerbated by climate change due to crop-production-related impacts of warmer and drier conditions that are expected in important agricultural regions. However, efforts to mitigate climate change through comprehensive, economy-wide GHG emissions reductions may also negatively affect food security, due to indirect impacts on prices and supplies of key agricultural commodities. Here we conduct a multiple model assessment on the combined effects of climate change and climate mitigation efforts on agricultural commodity prices, dietary energy availability and the population at risk of hunger. A robust finding is that by 2050, stringent climate mitigation policy, if implemented evenly across all sectors and regions, would have a greater negative impact on global hunger and food consumption than the direct impacts of climate change. The negative impacts would be most prevalent in vulnerable, low-income regions such as sub-Saharan Africa and South Asia, where food security problems are already acute. 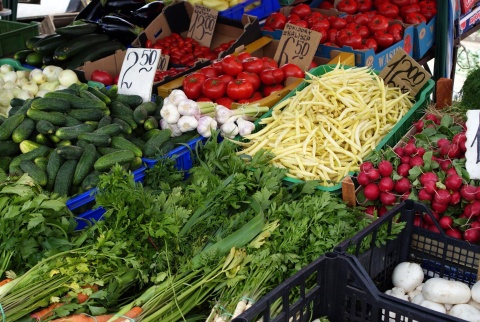