Balancing virtual land imports by a shift in the diet: Using a land balance approach to assess the sustainability of food consumption

This article examines the environmental impacts of the agri-food sector and different dietary patterns in Germany, focusing on the country's  virtual land import, described as imports based on land competition and large scale foreign land acquisitions (sometimes referred to as land grabbing). The paper analyses different dietary and nutrition scenarios during the years1985-1989 and 2006 and shows how these affect virtual land imports and nutrition-induced land demand.

The study calculates a net import of virtual land associated with current production and consumption patterns and it links dietary recommendations and dietary styles with virtual land flows. It proposes a dietary regime allowing for a balanced trade of virtual land in Germany. The study identifies the population groups that would have to adapt most – younger and middle-aged men -  to reach a diet that would allow for land balance. It also includes the latest published data on food losses/wastage in the agri-food sector in Germany and the corresponding impact on land requirements and the virtual land balance.

Some of the main conclusions are:

A combination of measures is identified as the best way towards more sustainable food production and consumption: the promotion of domestic legume production, measures to encourage consumers to increase their consumption of plant proteins while reducing animal products, and stronger efforts to decrease food losses/waste.

Nutrition is considered as one of the main drivers of global environmental change. Dietary patterns in particular, embedded in the international trade of foods and other biomass based commodities, determine the dimension of beneficial or harmful environmental impacts of the agri-food sector – both domestically and abroad. In this study we analysed different dietary scenarios from a virtual land flow perspective, based on representative consumption data for Germany in the years 2006 and 1985–89. Further we identified the consumer groups that would have to adapt most to balance Germany’s virtual land import and analysed the impact reduced food wastage.

For the study, official data sets concerning production, trade and consumption were used. We derived land use data from environmentally extended input–output data sets and FAO statistics. The conversion of agricultural raw products to consumed commodities is based on official processing and composition data. Subgroup-specific intake data from the last representative National Nutrition Survey in Germany were used. We analysed 42 commodities, aggregated into 23 product groups, seven land use types and six nutrition scenarios.

The results show that in the baseline scenario the average nutrition in the year 2006 leads to a virtual land import of 707 m2 p[1]1 a[1]1, which represents 30% of the total nutrition-induced land demand of 2365 m2 p[1]1 a[1]1. On the other hand, the German agri-food sector exports virtual land, in the form of commodities, equivalent to 262 m2 p[1]1 a[1]1. In this paper we calculate that the resulting net import of virtual land could be balanced by way of a shift to an officially recommended diet and a reduction in the consumption of stimulants (cocoa, coffee, green/black tea, wine). A shift to an ovo-lacto-vegetarian or vegan diet would even lead to a positive virtual land balance (even with maintained consumption of stimulants). Moreover, we demonstrate that a shift in the average diet profile could lead to maintained or even expanded export competitiveness and simultaneously enable environmental benefits. Since such a diet shift complies with official dietary recommendations, it follows that public health benefits may well result. We show further that a reduction of avoidable food losses/wastage would not be sufficient to level out the virtual land balance of the average nutrition in Germany.

Regarding the dietary developments in the last 20 years, we argue that a dietary shift resulting in a zero land balance is within reach. The population groups that would have to be addressed most are younger and middle-aged men. Nevertheless, women’s land saving potentials should not be ignored neither. Due to the fact that a western-style diet prevails in Germany, we argue that our basic findings are applicable to other industrialised and densely populated countries.

The article can be accessed here and downloaded as a pdf here. 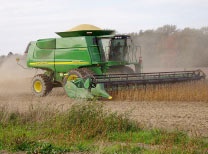