An ad used by Arla Foods to promote their organic milk has been banned as it used the "misleading" claim that its production is "good for the land".

The ad also stated that the milk was "helping support a more sustainable future” but the UK’s Advertising Standards Authority (ASA) decided that the ad was misleading on the grounds that dairy farming was not good for the land.  Consumers would in their view interpret the "good for the land" claim to mean that production of the milk would have an overall positive environmental impact from a full life cycle perspective. The authority also said Arla had not given “sufficient substantiation” that organic milk production had an overall positive impact on the environment.

Arla Foods responded through a spokesperson that one of the key principles of organic farming was good treatment of the land, that sustainability was at the heart of organic farming and that the environmental impact was considered in every step of the production process.

A representative from the UK National Farmers Union (NFU) also said in a comment "We are frustrated with how the ASA works, and we'd be really interested to learn how they reach these decisions.” 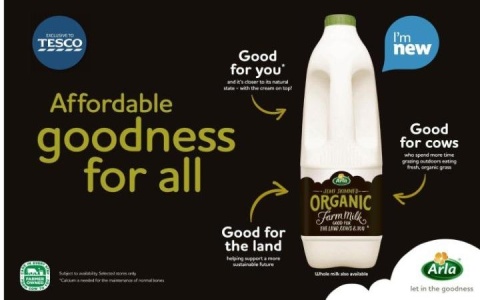