Aquaculture could save land relative to meat production

Our thanks go to FCRN member Emma Garnett for bringing to our attention a recent paper that investigates how land use could change if consumption were to shift away from meat and towards seafood from aquaculture. Aquaculture systems frequently use feed that is made from land-based crops. The paper studied two aquaculture-heavy scenarios (one using only marine aquaculture, and one using the current ratio of marine to freshwater aquaculture) where all additional meat consumption in 2050 (compared to today) is replaced by aquaculture products. Compared to a business-as-usual scenario for 2050, the aquaculture scenarios use around one-fifth less land to produce feed crops, because of the relative efficiency of aquatic organisms (compared to land-based animals) in converting feed into food that can be eaten by humans.

Note that the two aquaculture-heavy scenarios still use around two-fifths more land than is the case today, because of the greater total consumption of meat and seafood.

Of particular note is the feed crop saving due to using aquaculture species that do not need to be fed; bivalves, for example, can filter food particles from the water surrounding them and do not need external feed, and therefore do not use arable land. The aquaculture scenarios both assumed that molluscs accounted for 25% of aquaculture production.

The paper finds that aquaculture production would have to expand to over four times current production to replace a predicted 46% increase in the demand for meat by 2050.

Reducing food production pressures on the environment while feeding an ever-growing human population is one of the grand challenges facing humanity. The magnitude of environmental impacts from food production, largely around land use, has motivated evaluation of the environmental and health benefits of shifting diets, typically away from meat toward other sources, including seafood. However, total global catch of wild seafood has remained relatively unchanged for the last two decades, suggesting increased demand for seafood will mostly have to rely on aquaculture (i.e., aquatic farming). Increasingly, cultivated aquatic species depend on feed inputs from agricultural sources, raising concerns around further straining crops and land use for feed. However, the relative impact and potential of aquaculture remains unclear. Here we simulate how different forms of aquaculture contribute and compare with feed and land use of terrestrial meat production and how spatial patterns might change by midcentury if diets move toward more cultured seafood and less meat. Using country-level aquatic and terrestrial data, we show that aquaculture requires less feed crops and land, even if over one-third of protein production comes from aquaculture by 2050. However, feed and land-sparing benefits are spatially heterogeneous, driven by differing patterns of production, trade, and feed composition. Ultimately, our study highlights the future potential and uncertainties of considering aquaculture in the portfolio of sustainability solutions around one of the largest anthropogenic impacts on the planet. 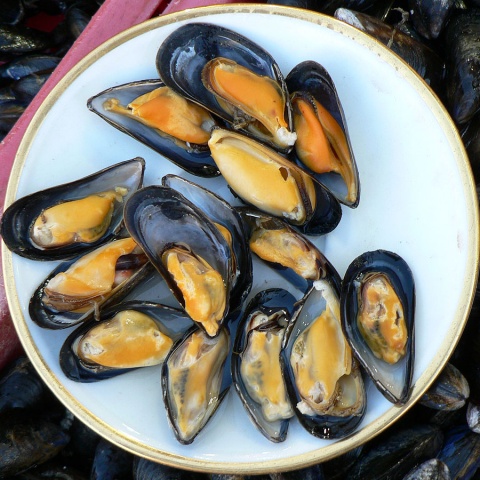