Among climate mitigation options, afforestation offers its carbon sequestration potential at a moderate cost, and therefore might be used at a large scale in the future. As suitable land is limited though, competition of land for forest with crop and pastureland might drive food prices up.

In addition, afforestation in different places might have different effects on the climate. Specifically, afforestation in the northern boreal zone typically turns land cover from snow – highly reflective of short wave radiation – to dark green forest. The resulting difference in albedo, or the reflecting power of a surface, could undo the reduction in warming potential that the CO2 uptake from afforestation would create.  This study considers how future food prices might be affected by different afforestation strategies, taking into account the net effect afforestation at different latitudes would have.

The authors used a modelling approach, in which they took CO2 pricing on land use change emissions as a driver of afforestation. The cost-effectiveness of afforestation in different areas was determinant of which places would become forest cover (first). They analysed five scenarios: one in which the price of CO2 would disincentive deforestation, three in which a higher CO2 price creates an incentive for afforestation and a business-as-usual scenario. The three afforestation scenarios were divided into afforestation 1) allowed everywhere, 2) avoided in the boreal zone, and 3) limited to the tropical zone. They observed how the model calculated land use under these scenarios and what the differences in afforestation might mean for food prices.

The model assumed that under the chosen CO2 price and unrestricted afforestation, over 2500 million ha gain forest between 2010 and 2100 (a 60% increase in global forest cover). Compared to the business-as-usual scenario, up to 860 Gt of CO2 are sequestered in this case. Much of this would take place in Africa (630 Mha) and Latin America (600 Mha). In most regions the afforestation would lead to a reduction in pasture, whereas in Europe and Pacific Asia current croplands would be the main area for growing forests. Total cropland area would be reduced by almost half (to some 800 Mha) in 2100, a value that was last seen around 1900. The model relies on significant investments into ‘yield-increasing technological change’ to allow for the reduction in agricultural land to be compensated for by increases in crop yields. Because yield increases requires technology and management changes, food prices are modelled to increase substantially under the afforestation scenarios. The restriction to no boreal afforestation reduces the newly forested area by about 13% globally, while the tropical land conversion remains similar.

In the model, afforestation leads to competition for land and so results in substantial food price increases. In the geographically unrestricted scenario, food prices would go up by about 80% and 400% by 2050 and 2100 respectively compared to 2010. Excluding the boreal areas would only reduce these numbers by about 9% in 2100. When the carbon sequestration is limited to new forests in tropical regions – which have the highest potential for cooling – food prices are predicted to peak at double the 2010 price in 2075. If international trade limitations were to continue to exist, this would increase the price of food more in some regions than others. This would be highly problematic, as tropical regions experience much of the globe’s food insecurity; afforestation projects may also reduce economic development potential, making nations in this region more reliant on other countries for food provisioning.

As with any modelling approaches, specifically those involving economic forecasting, it is important to consider that numerous assumptions have been taken to arrive at a result. Here, for example, yield increases due to R&D and technology change are modelled to rise far above historical rates, even for Europe, where the yield gap is in fact thought to be very small.

Ambitious climate targets, such as the 2 °C target, are likely to require the removal of carbon dioxide from the atmosphere. Afforestation is one such mitigation option but could, through the competition for land, also lead to food prices hikes. In addition, afforestation often decreases land-surface albedo and the amount of short-wave radiation reflected back to space, which results in a warming effect. In particular in the boreal zone, such biophysical warming effects following from afforestation are estimated to offset the cooling effect from carbon sequestration. We assessed the food price response of afforestation, and considered the albedo effect with scenarios in which afforestation was restricted to certain latitudinal zones. In our study, afforestation was incentivized by a globally uniform reward for carbon uptake in the terrestrial biosphere. This resulted in large-scale afforestation (2580 Mha globally) and substantial carbon sequestration (860 GtCO2) up to the end of the century. However, it was also associated with an increase in food prices of about 80% by 2050 and a more than fourfold increase by 2100. When afforestation was restricted to the tropics the food price response was substantially reduced, while still almost 60% cumulative carbon sequestration was achieved. In the medium term, the increase in prices was then lower than the increase in income underlying our scenario projections. Moreover, our results indicate that more liberalised trade in agricultural commodities could buffer the food price increases following from afforestation in tropical regions. 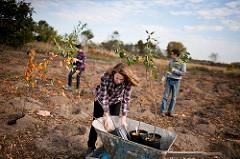