This paper uses climate models to estimate that average precipitation across many crop production areas will change by more than natural variability throughout the 21st century. Changes are seen even if emissions are relatively low, but meeting the Paris climate goals could reduce the extent of cropland that is affected.

The paper calculates “time of emergence” (TOE) for different regions. TOE is defined as the year when mean precipitation change becomes greater than the uncertainty due to noise and natural variability, based on an ensemble of climate models.

The results vary by emissions pathways, but generally the northern high latitudes (Canada, the eastern United States, northern Europe, and Russia) show increased precipitation, with TOE being as early as 2020 in some cases. Some areas are expected to experience a decrease in precipitation, including the Mediterranean region and three subtropical regions.

Image: Cumulative percentage of global production of four major crops affected by positive (A) and negative (B) precipitation changes under Representative Concentration Pathway 8.5.

A warming climate will affect regional precipitation and hence food supply. However, only a few regions around the world are currently undergoing precipitation changes that can be attributed to climate change. Knowing when such changes are projected to emerge outside natural variability—the time of emergence (TOE)—is critical for taking effective adaptation measures. Using ensemble climate projections, we determine the TOE of regional precipitation changes globally and in particular for the growing areas of four major crops. We find relatively early (<2040) emergence of precipitation trends for all four crops. Reduced (increased) precipitation trends encompass 1–14% (3–31%) of global production of maize, wheat, rice, and soybean. Comparing results for RCP8.5 and RCP2.6 clearly shows that emissions compatible with the Paris Agreement result in far less cropped land experiencing novel climates. However, the existence of a TOE, even under the lowest emission scenario, and a small probability for early emergence emphasize the urgent need for adaptation measures. We also show how both the urgency of adaptation and the extent of mitigation vary geographically. 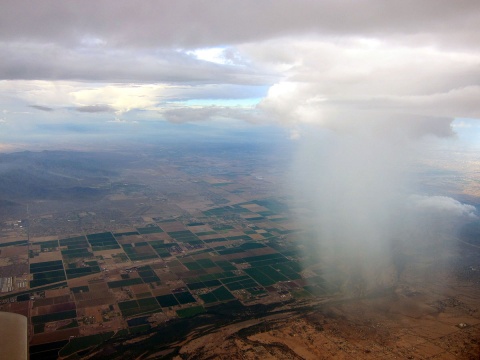