Yields of New Varieties of Agricultural Crops Continue to Increase

This paper contributes to the ongoing  discussion on sustainable intensiﬁcation in agriculture, focusing on the question of whether further yield increases are still possible. The researchers looked at trends in productivity increases achieved through the introduction of new varieties in the Netherlands between 1980 and 2010. A statistical technique allowed them to separate the influence of weather, CO2 levels and crop management from the effect of the new varieties themselves. They concluded that the new varieties introduced between 1980 and 2010 on average all had a higher yield than previous breeds. This finding applied to winter wheat, spring barley, potatoes grown for starch, and sugar beets, as well as, to a lesser extent, to ware potatoes. Over the period under review, the yield of the breeds of winter wheat and spring barley appearing in the market for the first time increased by around one per cent per year.

Nevertheless, while continued theoretical yield increases may have been achieved, the actual yields of farmers grew less fast or even stagnated, meaning that the ‘yield gap’ between what is potentially achievable and what is actually seen is widening. This means that the so-called yield gap between the potential and actual yield is growing. The question remains as to whether this is due to changing climate, soil quality, modified crop management, or a combination of these factors.

Crop yields are a result of interactions between genetics, environment and management (G × E × M). As in the Netherlands differences between potential yield and actual farm yields (yield gaps) are relatively small, progress in genetic potential is essential to further increase farm yields. In this paper we study the progress in yields of newly released varieties in ofﬁcial Dutch variety trials as a proxy for the progress in genetic yield potential, i.e., yield under absence of water and nitrogen limitation and pests and diseases.

The use of yields from variety trials as a proxy for genetic yield potential is justiﬁed as these are well managed and because water is hardly limiting under Dutch climate–soil conditions. We compared the genetic yield progress of winter wheat (Triticum aestivum L.), spring barley (Hordeum vulgare L.), ware and starch potato (Solanum tuberosum L.) and sugar beet (Beta vulgaris L.) over the past ca. 30 years (ca. 1980–2010) with the developments in on-farm yields over the same period. GenStat 14th edition was used to perform modiﬁed joint regression analyses (mjra) and residual (or restricted) maximum likelihood (reml) analyses of yields in order to separate year (i.e., climate and/or management) effects from variety effects. Genetic progress in yield has been linear with ca. 100 and 60 kg ha−1 year−1 (15% moisture), respectively, for winter wheat and spring barley, 580 kg ha−1 year−1 payment weight for starch potato, and, partly non-linear for sugar beet, i.e., 80–170 kg sugar ha−1 year−1 depending on resistance type of the varieties. We also analyzed signiﬁcant year effects (corrected for genetic progress) for most crops in the variety trials, which point at an effect of climate (environment) and/or management in addition to the genetic effect. Farm yields of winter wheat, spring barley and starch potato have increased linearly over the last decades, with ca. 90, 70 and 320 kg ha−1 year−1 (in the same units as above). Increase in sugar yields on farms was concave (20–230 kg ha−1 year−1) and spectacular over the last 10 years. For ware potatoes the genetic yield increase was only 20 kg dry matter ha−1 year−1 and reliable farm statistics for dry matter yields are lacking. We conclude that for the main crops in the Netherlands genetic progress in yield potential of varieties newly released over the past three decades has been substantial and largely linear. Farm yields for these crops also continued to increase, at approximately the same rates, but could not always keep pace with the combined genetic and year effects (G × E × M) in variety trials, suggesting a widening yield gap.

Here is a link to the paper and here you can read an article about the research. 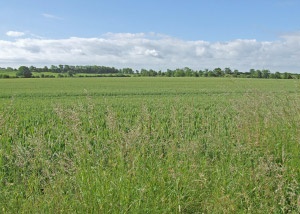