This book, edited by Chiara Tornaghi and Chiara Certomà, critically explores the social and political implications of urban gardening.

While most of the existing literature on community gardens and urban agriculture share a tendency towards either an advocacy view or a rather dismissive approach on the grounds of the co-optation of food growing, self-help and voluntarism to the neoliberal agenda, this collection investigates and reflects on the complex and sometimes contradictory nature of these initiatives. It questions to what extent they address social inequality and injustice and interrogates them as forms of political agency that contest, transform and re-signify ‘the urban’.

Claims for land access, the right to food, the social benefits of city greening/community conviviality, and insurgent forms of planning, are multiplying within policy, advocacy and academic literature; and are becoming increasingly manifested through the practice of urban gardening. These claims are symptomatic of the way issues of social reproduction intersect with the environment, as well as the fact that urban planning and the production of space remains a crucial point of an ever-evolving debate on equity and justice in the city. Amid a mushrooming over positive literature, this book explores the initiatives of urban gardening critically rather than apologetically. The contributors acknowledge that these initiatives are happening within neoliberal environments, which promote - among other things - urban competition, the dismantling of the welfare state, the erasure of public space and ongoing austerity. These initiatives, thus, can either be manifestation of new forms of solidarity, political agency and citizenship or new tools for enclosure, inequality and exclusion. In designing this book, the progressive stance of these initiatives has therefore been taken as a research question, rather than as an assumption.

The result is a collection of chapters that explore potentials and limitations of political gardening as a practice to envision and implement a more sustainable and just city.

For more details, see here. See also the Foodsource What about the relationship between food, culture, ethics and social norms? 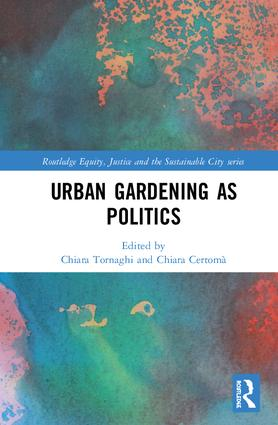