Keywords
Conservation/biodiversity
Deforestation
Land use and land use change
Landscapes

The figure below shows the similarity in patterns of forest fragment size distribution between the Americas, Africa and Asia-Australia. The researchers determined fragment sizes from satellite images of the areas shown in green.

The figures from the paper, below, demonstrate “percolation theory” - the model used by the researchers - which predicts that as forest cover decreases, the number of fragments increases sharply and then decreases. This is because deforestation breaks the original forest into multiple fragments, each of which can in turn be broken into smaller and smaller pieces. The landscape transitions from cleared areas surrounded by forest, to areas of forest surrounded by cleared land. The number of fragments begins to fall as small fragments are completely cleared.

Image: An illustration of percolation theory. The green areas represent forest. Going from a to d, deforestation breaks the forest into smaller connected areas, then smaller disconnected areas.

The authors used percolation theory to simulate future forest fragmentation (solid lines in the figure below) and found that observed numbers and sizes of fragments (green dots, below) are consistent with behaviour close to the point of sharply increasing fragmentation.

Remote sensing enables the quantification of tropical deforestation with high spatial resolution. This in-depth mapping has led to substantial advances in the analysis of continent-wide fragmentation of tropical forests. Here we identified approximately 130 million forest fragments in three continents that show surprisingly similar power-law size and perimeter distributions as well as fractal dimensions. Power-law distributions have been observed in many natural phenomena such as wildfires, landslides and earthquakes. The principles of percolation theory provide one explanation for the observed patterns, and suggest that forest fragmentation is close to the critical point of percolation; simulation modelling also supports this hypothesis. The observed patterns emerge not only from random deforestation, which can be described by percolation theory, but also from a wide range of deforestation and forest-recovery regimes. Our models predict that additional forest loss will result in a large increase in the total number of forest fragments—at maximum by a factor of 33 over 50 years—as well as a decrease in their size, and that these consequences could be partly mitigated by reforestation and forest protection. 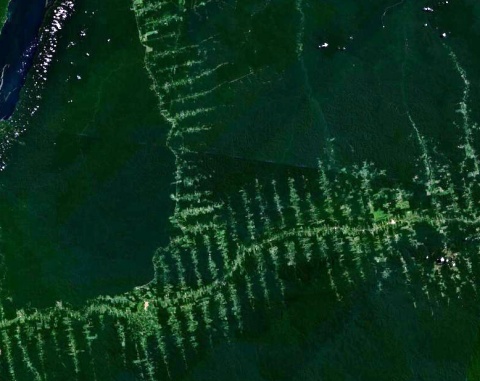