Tracking the global footprint of fisheries

This paper presents the findings of a large-scale study which used global tracking data on sea-going vessels to characterise the scale, distribution and drivers of the global fishing effort.

The authors took advantage of the recent expansion in the use of the automatic identification system (AIS), which is used by a high proportion of sea-going vessels to prevent collisions. Two convolutional neural network models were trained to recognise fishing vessel characteristics and fishing activity using an AIS dataset where the vessel and fishing activity characteristics were already known. The resulting trained system could detect vessel and fishing activity characteristics from AIS data where those characteristics were not known in advance. The system characterises fishing effort at a global level, at an astonishing level of precision in both time (to within an hour) and space (to within a square kilometre). The resulting data set tracked the activities of more than 70,000 identified fishing vessels. This is only a small proportion of the world’s estimated 2.9 million motorised fishing vessels, but accounts for more than 50% of the largest (longer than 24 m) vessels. The authors estimate that the vessels for which they have AIS data account for between 50 and 70% of the fishing effort in the open ocean. Note that this study uses the data simply to characterise the current fishing effort, and, as may be inferred from the title, is not concerned with assessing its impact.

The key findings from the analysis of these data are:

The authors conclude that fishing is similar to other forms of modern food production in that it is partially insulated from natural drivers (such as annual variations in net primary productivity, i.e. rate at which ocean organisms take up carbon from the atmosphere) and is influenced more by policy and culture. They note that the footprint of fishing is much larger than that of terrestrial food production (the area of ocean that is industrially fished is four times that covered by terrestrial agriculture), despite supplying only 1.2% of global calories for human consumption (the paper does not mention what fraction of protein or other nutrients fish provide). They suggest that the lightly-fished regions of the ocean may provide marine conservation opportunities, and recommend that the data-set generated in this study be used as a tool to improve global-scale ocean governance.

Although fishing is one of the most widespread activities by which humans harvest natural resources, its global footprint is poorly understood and has never been directly quantified. We processed 22 billion automatic identification system messages and tracked >70,000 industrial fishing vessels from 2012 to 2016, creating a global dynamic footprint of fishing effort with spatial and temporal resolution two to three orders of magnitude higher than for previous data sets. Our data show that industrial fishing occurs in >55% of ocean area and has a spatial extent more than four times that of agriculture. We find that global patterns of fishing have surprisingly low sensitivity to short-term economic and environmental variation and a strong response to cultural and political events such as holidays and closures. 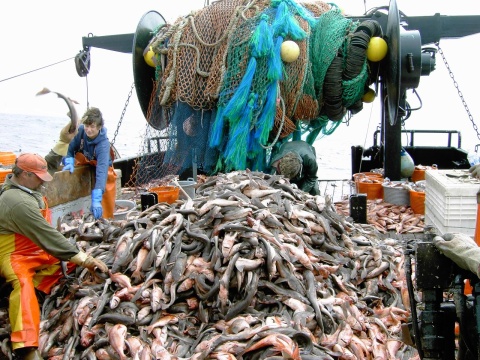