Support for swill as animal feed

FCRN member Erasmus zu Ermgassen has found that in a survey of farmers and other stakeholders, more than 75% of them would support re-legalising the use of swill (cooked waste food) as animal feed. Half of all pig farmers said they would consider using swill on their farm, were it re-legalised and safe heat-treatment procedures introduced. Erasmus has written a blog post to explain the topic.

Erasmus says, “Swill (cooked food wastes) is a commonly used, sustainable animal feed in many parts of the world, but illegal in the EU, because of disease control concerns. Safe swill feeding can however be done - Japan and South Korea operate regulated systems for safely heat-treating 40% of food waste, to recycle it as animal feed. This new study surveyed farmers at the UK's largest pig & poultry trade-fair and shows that many UK farmers would support swill's re-legalisation.”

While food losses (foods which were intended for human consumption, but which ultimately are not directly eaten by people) have been included in animal feed for millennia, the practice is all but banned in the European Union. Amid recent calls to promote a circular economy, we conducted a survey of pig farmers (n = 82) and other agricultural stakeholders (n = 81) at a UK agricultural trade fair on their attitudes toward the use of food losses in pig feed, and the potential relegalisation of swill (the use of cooked food losses as feed). While most respondents found the use of feeds containing animal by-products or with the potential for intra-species recycling (i.e. pigs eating pork products) to be less acceptable than feeds without, we found strong support (>75%) for the relegalisation of swill among both pig farmers and other stakeholders. We fit multi-hierarchical Bayesian models to understand people’s position on the relegalisation of swill, finding that respondents who were concerned about disease control and the perception of the pork industry supported relegalisation less, while people who were concerned with farm financial performance and efficiency or who thought that swill would benefit the environment and reduce trade-deficits, were more supportive. Our results provide a baseline estimate of support amongst the large-scale pig industry for the relegalisation of swill, and suggest that proponents for its relegalisation must address concerns about disease control and the consumer acceptance of swill-fed pork.

Read the full paper here. See also the Foodsource chapter What is the connection between infectious diseases in humans and livestock?

You may also be interested in the blog post written by FCRN member Karen Luyckz about The Pig Idea, a campaign to feed surplus food to pigs. If you would like to write a blog post for us, please do get in touch. 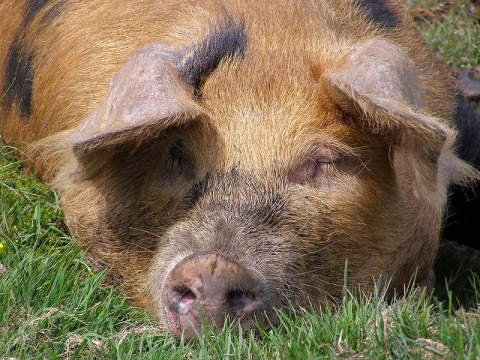