The journal Ecological Economics has devoted an issue to the concept of degrowth. Degrowth is a political, economic, and social movement based on ecological economics, anti-consumerist, and anti-capitalist ideas. Degrowth thinkers and activists advocate for the downscaling of production and consumption, arguing thatoverconsumption lies at the root of long-term environmental issues and social inequalities.

Key to the concept of degrowth is the idea that reducing consumption does not require individual martyring and a decrease in well-being. Rather, 'degrowthists' aim to maximize happiness and well-being through non-consumptive means—sharing work, consuming less, while devoting more time to art, music, family, culture and community.

Here are some articles from the issue that might be of interest.

The economic and financial dimensions of degrowth

In this article, researchers look at the concept of degrowth on the monetary and financial system. They criticize degrowth as an explicit strategy to reach a sustainable economy by making the argument that the degrowth scenario would first likely cause an economic implosion, or a sharp drop in global GDP in a very short period of time, followed by a new rapid growth cycle, which would eventually reignite ecological concerns.

Time, gender and carbon: A study of the carbon implications of British adults’ use of time

This study explores the greenhouse gas emissions per unit time for different types of activities. It focuses on ‘non-work’ time, and examines how different activities, such as household chores and leisure pursuits, give rise to varying amounts of household carbon emissions. The concept of carbon is also discussed as a potential marker for social justice, as well as the implications of these findings for the varying roles carried out within different types of households.

The economics of degrowth

This article reviews recent contributions in the economics of degrowth and identifies research avenues for ecological economists.

Degrowth and the supply of money in an energy-scarce world

This paper argues that three tools are essential to avoid degrowth becoming a catastrophic collapse: 1) a system to share the benefits from using increasingly-scarce fossil fuels, 2) new ways of financing businesses and 3) the introduction of debt-free regional and local currencies.

This paper compares several macroeconomic scenarios using LowGrow, a simulation model of the Canadian economy. The scenarios considered are ‘business as usual’ which is a projection into the future of past trends, ‘selective growth’ in which differential growth rates are applied to parts of the economy according to their direct and indirect greenhouse gas emissions, and ‘degrowth’ where the average GDP/capita of Canadians is reduced towards a level more consistent with a world economy the size of which respects global environmental limits.

This article critically reviews the case for a steady-state, zero growth economy, posing the question whether such an economy can be stable and socially just, given that in the current global economy lack of growth is synonymous with crisis. 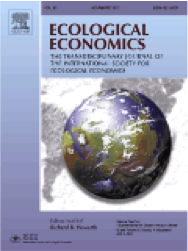