This paper, which looks at the impact of agricultural intensification on soils across Europe, suggests that differences in the intensity of land use significantly affects soil ecosystems and the services they provide. High intensity arable land use is found to a have lower diversity and biomass of soil organisms than lower intensity arable or permanent grassland, and that this affects the carbon and nitrogen cycles in the environment.

The researchers examined soil organisms and their effects on carbon and nitrogen cycling at 60 sites across four European countries: the Czech Republic, Greece, Sweden and the United Kingdom. The sites were spread across different land uses: high intensity (intensive annual arable cultivation), medium intensity (extensive rotation of arable crops, including arable land set aside) or low intensity (permanent grassland). The study recorded the effects on carbon and nitrogen cycling by measuring the loss of carbon from the soil in the form of CO2 and methane; gases which contribute to global warming and air pollution. Losses of nitrogen dissolved in water, which can stimulate algal growth and pollute water bodies, were also measured. Finally, the researchers recorded ‘nitrogen mineralisation’ which is a measure of the conversion of nitrogen into a form that is accessible by plants.

The results demonstrate that both the diversity and the biomass of soil organisms, which can include bacteria, fungi or earthworms, were lower in areas of arable high and medium land use intensity, compared to low intensity permanent pasture. The reduction in biomass was most extreme for those organisms associated with plant roots, because both high and medium intensity land uses involved the practice of tilling, which disrupts root systems. The researchers also found that as the biomass of bacteria (and associated organisms) dropped, nitrogen mineralisation also decreased. This, suggest the authors, may drive a greater dependence on mineral fertilisers in high intensity landscapes, because of the loss of this important service. Excess nitrogen mineralisation can become an ecosystem ‘disservice’ if more is produced than is used by plants, leading to losses of nitrogen dissolved in water (also known as leaching) and increased nutrient pollution of water bodies. The researchers found that more nitrogen was leached when the biomass of nematode worms that feed on bacteria was high. However, nitrogen leaching was reduced in soils which had large amounts of arbuscular mycorrhizal fungi (AMF), a type of fungus which is associated with plant roots. The researchers note that greater CO2 production does not mean that there is a net loss of carbon, as this is determined by the balance between rates of loss and gain. All soils absorbed methane but methane consumption was lower as bacterial biomass increased. The researchers conclude that this study demonstrates the significant effects of land use intensification on soil ecosystems and may help to improve predictions regarding their response to climate change.

Intensive land use reduces the diversity and abundance of many soil biota, with consequences for the processes that they govern and the ecosystem services that these processes underpin. Relationships between soil biota and ecosystem processes have mostly been found in laboratory experiments and rarely are found in the field. Here, we quantified, across four countries of contrasting climatic and soil conditions in Europe, how differences in soil food web composition resulting from land use systems (intensive wheat rotation, extensive rotation, and permanent grassland) influence the functioning of soils and the ecosystem services that they deliver. Intensive wheat rotation consistently reduced the biomass of all components of the soil food web across all countries. Soil food web properties strongly and consistently predicted processes of C and N cycling across land use systems and geographic locations, and they were a better predictor of these processes than land use. Processes of carbon loss increased with soil food web properties that correlated with soil C content, such as earthworm biomass and fungal/bacterial energy channel ratio, and were greatest in permanent grassland. In contrast, processes of N cycling were explained by soil food web properties independent of land use, such as arbuscular mycorrhizal fungi and bacterial channel biomass. Our quantification of the contribution of soil organisms to processes of C and N cycling across land use systems and geographic locations shows that soil biota need to be included in C and N cycling models and highlights the need to map and conserve soil biodiversity across the world.

You can read access the article here and more about the SOILSERVICE project, and their results here.

You can also find resources on land use /ecosystems on the FCRN website   here and soil here. 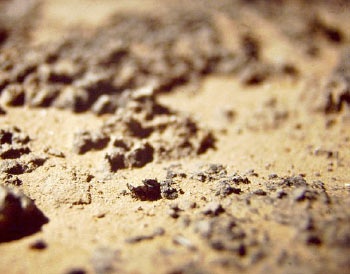