This paper examines three scenarios for animal-source food production in the European Union under two constraints: halting all imports of soybeans and soybean meal used as animal feed, and not using any additional land for animal feed cultivation (either inside or outside the EU).

All scenarios were assumed to produce the same amount of human-edible protein and fat, including some sourced from imported palm oil (for fat) and imported soybean (for protein). In all scenarios, feed for pigs and poultry maintained adequate protein and essential amino acid levels by having a greater proportion of pulses and protein-rich byproducts than in the baseline case.

The three scenarios are:

Image: Figure 5, Karlsson et al. Nutrient content of EU-produced animal-source foods and plant-source protein and fat replacements. Nutrient content is normalized to the EU population’s weighted average requirement of each nutrient (in brackets). A value of 1 means that the food produced contains 100% of the requirements. For vitamin B12, average requirement data are not available and adequate intake values were used instead. The recommendation for total fat is expressed as a range with a lower and upper bound, where the lower value is used here. Nutrient content refers to edible food produced before any post-farm processing, distribution, retail and household losses, so quantities consumed are lower. BL, baseline (2014–2016); S1, feed crops scenario; S2, oil crops scenario; S3, food crops scenario; RE, retinol equivalents.

The paper is co-authored by Table members Johan Karlsson and Elin Röös of the Swedish University of Agricultural Sciences, and Hannah van Zanten of Wageningen University and Research. Karlsson summarises the research in a blog post - The European Union’s hunger for soybean - which includes a diagram of the quantity of soybean used to produce a variety of animal-sourced and plant-sourced food types.

The European Union (EU) livestock sector relies on imported soybean as a feed source, but feeding soybean to animals leads to a loss of macronutrients compared to direct human consumption, and soybean production is associated with deforestation. Here we show that 75–82% of current EU animal fat and protein production could be sustained without soybean imports while avoiding increased use of cropland for feed production within the EU. Reduced soybean feed exports, mainly from South America, would free up 11–14 million hectares outside the EU, but indirect land-use changes would increase demand for palm oil produced in southeast Asia. Avoiding imported soybean feeds would result in reduced EU pork and poultry production; increased plant-based food consumption would be required to maintain the supply of essential nutrients for human diets. Optimising livestock production to overcome dependency on imported soybean feed can reduce cropland demand in deforestation-prone areas while supporting the nutritional requirements of EU diets—but will require progressive policies targeting all aspects of the food system.

Read the full paper here. See also the Table explainer Soy: food, feed, and land use change and Walter Fraanje’s Table blog post Soy in the UK: What are its uses? 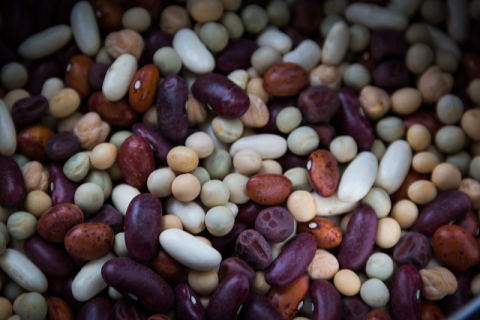