Behavioural scientists have demonstrated that changing the context in which people act (for example, by manipulating restaurant menu designs) shapes food choices. However, less is known about whether and to what extent the effectiveness of these behavioural interventions is moderated by factors beyond the immediate context in which the choice is made (for example, past behaviour is one of the strongest predictors of future eating). Given the importance of past behaviour in the context of food choice, this study uses past behaviour as a measure of a person's overall propensity to make specific food choices and to understand whether the effectiveness of different restaurant menus in nudging pro-environmental food choice depends on how frequently people had eaten vegetarian dishes in the past. Specifically, in this article it was moderated by the number of days on which people reported eating only vegetarian food during the previous week.

The study employed one control restaurant menu design (where dishes were presented in the same manner as each other) and three treatment designs:

The study recruited 853 UK participants through an online survey, where participants were randomly assigned the four different restaurant menus.

The main findings were:

Overall, the results from this research suggest that, whereas certain menu designs can have a positive impact on pro-environmental food choice for infrequent eaters of vegetarian food, they can also backfire for frequent eaters of vegetarian food and have an unintended impact on food selection. The study points out that people's past behaviour affects the impact of nudging on food choices. This intervening factor has to be carefully examined to avoid undesirable behavioural effects and to achieve a sustainable eating pattern.

Previous research has shown that restaurant menu design can influence food choices. However, it remains unknown whether such contextual effects on food selection are dependent on people's past behavior. In the present study, we focused on vegetarian food choices, given their important implications for the environment, and investigated whether the influence of different restaurant menus on the likelihood of selecting a vegetarian dish is moderated by the number of days on which people reported eating only vegetarian food during the previous week. In an online scenario, participants were randomly assigned to four different restaurant menu conditions—control (all dishes presented in the same manner), recommendation (vegetarian dish presented as chef's recommendation), descriptive (more appealing description of vegetarian dish), and vegetarian (vegetarian dishes placed in a separate section)—and ordered a dish for dinner. The results showed that the recommendation and descriptive menus increased the likelihood of vegetarian dish choices for infrequent eaters of vegetarian foods, whereas these effects tended to reverse for those who ate vegetarian meals more often. The vegetarian menu had no impact on the infrequent vegetarian eaters' choice but backfired for the frequent vegetarian eaters and made them less likely to order a vegetarian dish. These findings indicate that people's past behavior is an important determinant of the impact of nudging on food choices, and that achieving sustainable eating may require more personalized interventions.

Read the full paper here. See also the Foodsource chapter What can be done to shift eating patterns in healthier, more sustainable directions? 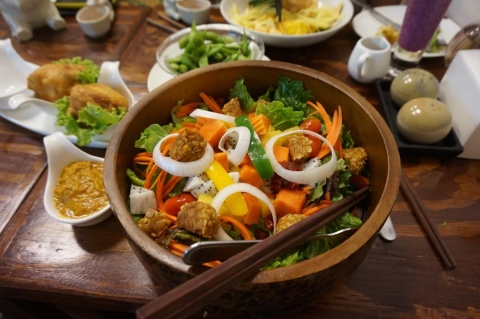