This paper sets out proposals for reforming the global food system to reduce the risk of disease outbreaks and pandemics originating from wildlife. It proposes limiting human encroachment on tropical areas of wilderness by shifting to diets low in animal-source foods; reducing urban demand for tropical wild meat while protecting access to wild meat by indigenous and subsistence communities; and improving biosecurity measures to prevent transmission of diseases between wildlife and humans along animal source food supply chains.

A reduction in livestock production is recommended because the expansion of farmland for grazing and feed production into tropical forests, grasslands and wetlands increases contact between wildlife, people and livestock. It also negatively impacts large herbivores and predators, which can lead to an increase in populations of disease-carrying rodents, bats, birds and primates. Flexitarian diets - with high levels of plant-based foods, moderate amounts of fish, poultry, eggs and dairy and low levels of red and processed meat - are suggested as a means of feeding the global population without further expanding the area of farmland. Along with conversion to agroecology/organic farming and reductions in food losses and wastage, these diets therefore constitute a key component of a sustainable global food system.

Regarding wild meat, the paper argues that outright bans may fail to discourage, and in some cases encourage, demand. It can have other undesired negative effects, including harming people who rely on hunted meat for nutrition, undercutting the pest control role that some hunting plays, damaging relationships between communities and conservation authorities, and shifting trade to illegal and unregulated channels with weaker biosecurity measures. The paper recommends instead containing tropical wild meat hunting and trade by curbing urban wild meat demand, while promoting access rights and biosecurity measures among indigenous people and local communities in remote subsistence areas.

Biosecurity measures that can be promoted among hunting communities include: wearing protective clothing when handling wild animals; not collecting dead or dying animals; wrapping carcasses to prevent blood from contacting cuts in people’s skin; proper storage of carcasses; and cooking wild meat thoroughly before eating. The paper also describes biosecurity, physical and biological distancing measures that can be taken at other stages of the animal source food supply chains including farms, pastures, abattoirs, and wet markets, and at logging, mining, cash crop and infrastructure construction sites.

A debate has emerged over the potential socio-ecological drivers of wildlife-origin zoonotic disease outbreaks and emerging infectious disease (EID) events. This Review explores the extent to which the incidence of wildlife-origin infectious disease outbreaks, which are likely to include devastating pandemics like HIV/AIDS and COVID-19, may be linked to excessive and increasing rates of tropical deforestation for agricultural food production and wild meat hunting and trade, which are further related to contemporary ecological crises such as global warming and mass species extinction. Here we explore a set of precautionary responses to wildlife-origin zoonosis threat, including: (a) limiting human encroachment into tropical wildlands by promoting a global transition to diets low in livestock source foods; (b) containing tropical wild meat hunting and trade by curbing urban wild meat demand, while securing access for indigenous people and local communities in remote subsistence areas; and (c) improving biosecurity and other strategies to break zoonosis transmission pathways at the wildlife-human interface and along animal source food supply chains.

Read the full paper here. See also the TABLE explainer What is the connection between infectious diseases in humans and livestock? 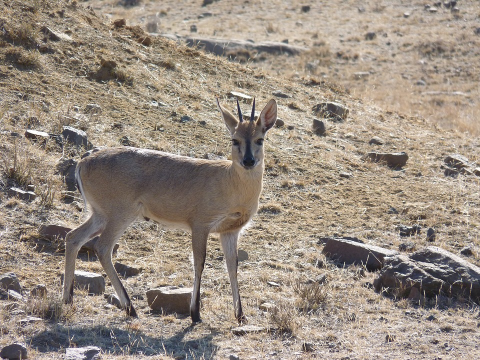