The Politics of Food Provisioning in Colombia

This book uncovers the conflicts and politics of food provisioning in Colombia: who produces what and where, and with what socio-economic effects. The book explains the re-emergence of national agrarian movements, their contestation of the dominant development narratives and their engagement in discussions about food sovereignty with the state.

This book explores food provisioning in Colombia by examining the role and impact of the agrarian negotiations which took place in the aftermath of the 2013–2014 national strikes.

Most of the research in the field of agrarian studies in Colombia has focused on inequalities in land distribution, the impacts of violent conflict, and most recently, the first phase of the peace agreement implementation. This book links and complements these literatures by critically engaging with an original framework that uncovers the conflicts and politics of food provisioning: who produces what and where, and with what socio-economic effects. This analytical lens is used to explain the re-emergence of national agrarian movements, their contestation of the dominant development narratives and their engagement in discussions about food sovereignty with the state. The analysis incorporates a wide range of voices from high-level government representatives and leaders from national agrarian movements. Their narratives of food provisioning and the broader role of the food industry are reviewed and the key findings show an underlying conflict within food provisioning based on the struggle of marginalised smallholders to develop alternative agri-food systems that can be included in the local and domestic food markets in the context of a state dominated by an export and import approach. Overall, the book argues that the battleground of agrarian conflicts has moved to the field of food provisioning and using this approach has the potential to reframe the debate about the future of food and agriculture in Colombia and beyond.

This book will be of great interest to students and scholars of food and agriculture, rural development, peasant studies, and Latin American Studies.

Roa-Clavijo, F. (2021). The Politics of Food Provisioning in Colombia: Agrarian Movements and Negotiations with the State. Routledge, Abingdon. 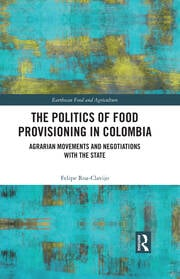