Being the public voice of over 180 member organisations across nearly 90 countries, La Vía Campesina, the global peasant movement, has planted itself firmly on the international scene. This book explores the internationalisation of the movement, with a specific focus on the engagement of peasants in the processes of the Committee on World Food Security (CFS).

Since the reform of the CFS in 2009, civil society actors engage in the policy processes of this UN Committee from a self-designed and autonomous global Civil Society Mechanism. The author sheds light on the strategies, tensions, debates, and reconfigurations arising from rural actors moving between everyday struggles in the fields and those of the UN arena.

Whereas most theories in the dominant literature on social movements expect them to either disappear or institutionalise in a predetermined pattern, the book presents empirical evidence that La Vía Campesina is building a much more sophisticated model. The direct participation of representatives of peasant organisations in the CFS is highlighted as a pioneering example of building a more complex, inclusive and democratic foundation for global policy-making. 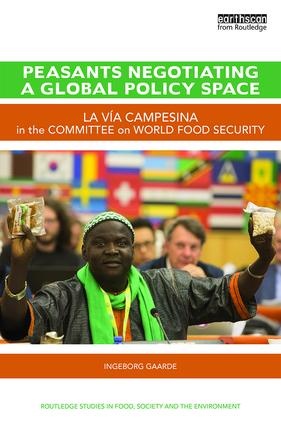