FCRN members Laurence Smith and Adrian Williams co-authored this paper, which finds that converting all food production in England and Wales to organic farming would reduce direct agricultural emissions in the UK, but would cause higher emissions from overseas farming due to lower yields in England and Wales.

A previous study (a joint publication between the FCRN and the WWF: How Low Can We Go?) to assess the greenhouse gas (GHG) impacts of switching to organic farming in the UK found that direct GHG emissions from UK farming could be reduced by 8% relative to the non-organic baseline. However, this estimate did not account for changes that might occur in overseas farming as a result of yield changes in the UK, or increased UK soil carbon sequestration - a gap that Smith et al. aimed to fill.

This paper finds that switching entirely to organic food production in England and Wales would cause both human metabolisable energy (calories) and protein production to fall by approximately 40% (the production scenario and the associated modelling approach is described here). This is because of lower yields per unit area of land under organic production, compared to conventional production, and because of the need to introduce legume/grass leys into crop rotations to build soil fertility which reduces the amount of land available for arable cropping (note, however, that animals can graze on the legume/grass leys until the plants are ploughed back into the soil after three to four years). This reduction in arable cropping area is a system-level effect that is not captured by crop-level comparisons that contrast only the arable cultivation phases of organic and conventional production (i.e. without accounting for crop rotations).

At the national level (i.e. England and Wales together), total farming emissions under organic production would be around 20% lower for crops, 4% lower for livestock and 6% lower overall.

The paper assumes that the mix of crops and livestock types produced in England and Wales changes relative to the current mix, e.g. more legumes would be grown to fix nitrogen in crop rotations, and more potatoes would be grown as weed control. However, it does not account for any human dietary change, so that the comparison with present farming methods could be made on a stable baseline. To make up for shortfalls in production, therefore, assuming current levels of food consumption, additional food must be produced abroad and imported to England and Wales.

This additional overseas production would increase overall land use, as shown below. Nearly five times the current amount of overseas land used for the food types considered in this study would be required to offset lower yields in England and Wales.

Image: Figure 4, Smith et al. Overseas land area needed for imported food. Products that are not produced in the UK on a large scale (such as maize, rice, tea, coffee and sugar cane) are excluded.

Higher soil carbon sequestration in England and Wales under organic production (e.g. due to more use of manure as fertiliser) would not be enough to offset the additional GHG emissions from overseas production and would be time-limited, as soils will eventually reach a new steady level of organic carbon following management change.

Agriculture is a major contributor to global greenhouse gas (GHG) emissions and must feature in efforts to reduce emissions. Organic farming might contribute to this through decreased use of farm inputs and increased soil carbon sequestration, but it might also exacerbate emissions through greater food production elsewhere to make up for lower organic yields. To date there has been no rigorous assessment of this potential at national scales. Here we assess the consequences for net GHG emissions of a 100% shift to organic food production in England and Wales using life-cycle assessment. We predict major shortfalls in production of most agricultural products against a conventional baseline. Direct GHG emissions are reduced with organic farming, but when increased overseas land use to compensate for shortfalls in domestic supply are factored in, net emissions are greater. Enhanced soil carbon sequestration could offset only a small part of the higher overseas emissions. 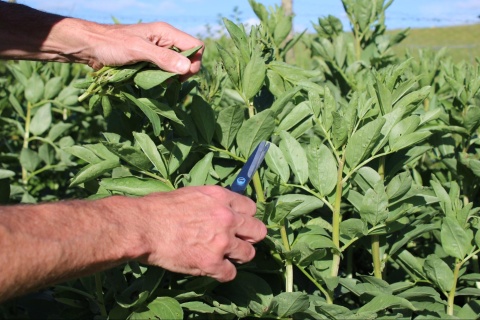