This article in the European Molecular Biology Organisation (EMBO) journal examines NGOs’ opposition to agricultural biotechnologies. It finds that opposition to genome editing cannot be dismissed as being solely emotional or dogmatic, as is often asserted by the scientific molecular biology community (see for example this 2016 letter by 107 Nobel Laureates calling NGO action against GM a "crime against humanity”). Instead, opposition to genome editing among research participants was rooted in three areas of scepticism around the framing of food security problems and the proposed solutions.

The results are based on a 1‐day focus group and nine semi‐structured interviews involving fourteen participants from UK and EU‐based NGOs with an interest in genome editing in agriculture: Beyond GM, Compassion in World Farming, Corporate Europe Observatory, Econexus, FARM, Food Ethics Council, Friends of the Earth, GeneWatch UK, GM Freeze, GM Watch, Greenpeace, Logos Environmental, Sustain, and the Permaculture Association. The focus group and interviews examined the social and ethical issues raised by NGOs in the context of agricultural biotechnology with a specific focus on genome editing. The authors analysed the results using ‘frame analysis’, a tool to analyse how groups articulate and promote a particular understanding of an issue, and why they exclude alternatives.

The main findings of the research are that NGO participants objections to GM are:

A few interesting remarks from the article:

‘Participants argued that the use of “crisis” or “emergency” frames to justify genome editing was not simply a declaration of fact, but a political claim used for political means. They suggested that declarations of a global crisis were used to silence critics, with proponents of genome editing claiming the moral high ground and opposition framed as unethical.‘

‘NGO participants argued that genome editing fails to address the inherent unsustainability of monoculture‐based agriculture. They saw genome editing as a managerial solution by providing new avenues of control through modifying specific plant traits, most notably insect and herbicide resistance. As some participants noted, even if new genome editing techniques help to generate plants that solve the managerial problems of intensive monocultures, they cannot solve the negative externalities that intensive monocultures produce.’

‘NGOs regarded [the] continued reliance on scientific and technological solutions as crowding out much needed discussion of alternative means of addressing global food vulnerabilities. (...) Rather, emergent interest in genome editing was regarded as drawing on research funding that could be better spent elsewhere, if the debate was opened up to discuss alternatives.’

‘NGO participants made repeated reference to the commercial dimension of genome editing and were highly sceptical of the way in which this matter was routinely marginalised in debates.(...) Consequently, NGO participants perceived public and private research as creating opportunities for increased corporate capture of the agricultural and food system at the expense of farmers, citizens and consumers. ‘

‘NGO participants argued that this dynamic also played out through narrowing the debate to scientific assessments of risk and safety. Rather than engaging with this commercial dimension, advocates for genome editing support risk assessment as the sole basis upon which to make decisions about genome editing. NGO participants argued that the sole reliance on scientific risk assessment came at the expense of social, economic and political considerations, something they found deeply frustrating and self‐defeating.’

The NGOs did not discuss certain advantages of genome editing. For example, they did not consider the ‘democratising potential of genome‐editing technologies such as CRISPR/Cas9, but focused on the current state of ownership regarding the products and proceeds of agricultural biotechnology without considerations of how genome editing may challenge this status quo.’

Helliwell, R., Hartley, S., Pearce, W. and O'Neill, L., 2017. Why are NGOs sceptical of genome editing?: NGOs’ opposition to agricultural biotechnologies is rooted in scepticism about the framing of problems and solutions, rather than just emotion and dogma. EMBO reports, p.e201744385.

To read the article, see here. 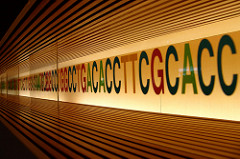