This report, commissioned by Lloyd’s, describes how our food system is becoming increasingly vulnerable to acute shocks and underlines the pressing need to reduce the uncertainty surrounding the impacts of an extreme shock to the food supply.

“Sudden disruptions to the supply chain could reduce the global food supply and trigger a spike in food prices, leading to substantial knock-on effects for businesses and societies. The food system’s existing vulnerability to systemic shocks is being exacerbated by factors such as climate change, water stress, ongoing globalisation, and heightening political instability. The report is based on a scenario that was developed to explore the implications for insurance and risk of extreme shock to global food production. Experts in the field of food security and the economics of sustainable development were asked to develop a scenario describing a plausible, relatively severe production shock affecting multiple agricultural commodities and regions, and to describe the cascade of events that could result.”

The report argues that the systemic production shock to the world’s staple food crops described in the scenario would have widespread economic, political and social impacts. 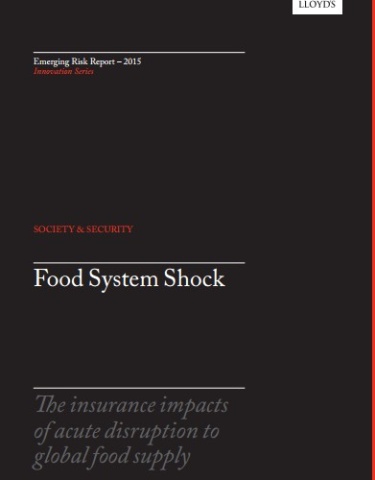