In this paper, George Cusworth, Tara Garnett and Jamie Lorimer of the Oxford Livestock, Environment and People (LEAP) project explore six narratives about the role that legumes can play in the future European food system. They identify three issues that these narratives are responding to as well as three areas of consensus about the potential of legumes.

The paper notes that the area of farmland dedicated to legumes in Europe has declined since the 1960s, driven by better financial returns on cereal production, the availability of cheap imported animal feed, farm machinery being better suited to cereals than legumes, policies that reward higher-yield crops, and the availability of synthetic nitrogen inputs, reducing the need for nitrogen fixation by legumes. The six narratives about legumes identified by the paper are illustrated in the figure below. Responding to ideas about the future of meat and dairy:

Responding to the tension between “eco-pessimism” and “techno-optimism”:

The three areas of consensus the paper identifies are:

With the intensification of agriculture, the simplification of crop rotations, and the rise in demand for meat, dairy and cereal products, legume production and consumption are at an historic low in Europe. But as the environmental consequences of agriculture (biodiversity loss, high greenhouse gas emissions, water pollution) and the health outcomes of modern diets (heart disease, cancer, diabetes, obesity) become better known, so great and varied hopes are being expressed about the future role of legumes in the food system. This paper catalogues and scrutinises these hopes, mapping the promissory narratives now orbiting around legumes. It identifies six food futures, each of which is made possible through the greater use of legumes in various production, processing, marketing and consumption contexts. These promissory narratives are theorised as contrasting responses to three major areas of contestation in the food systems literature. Namely i) the sustainability of livestock management, ii) the role of technology in different visions of the ‘good diet’, and iii) the merits of different models for how to make agricultural management more sustainable. It identifies the promiscuity of legumes – in terms of the range of food futures they permit – before distilling three points of consensus amongst advocates of the potential of legumes. These points of consensus relate to their nitrogen fixing capacity, their high protein content, and their long-standing historical role in the context of European food and farming. This map of legume dreams serves to guide deliberations amongst researchers, policymakers and industry stakeholders about the futures of plant-based food in Europe. 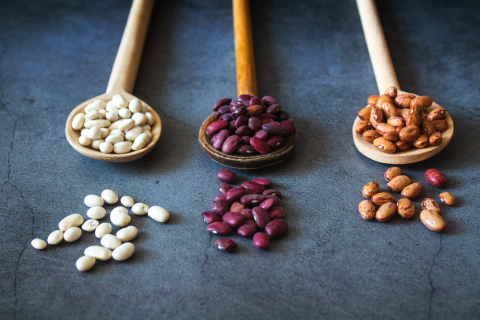