Researchers from Conservation International have found a small island near Timor-Leste with staggering species richness. Atauro Island, home to about 8,000 people sits in the middle of the so-called Coral Triangle, known for its biodiverse marine environments.

Species surveys have shown that this island harbours the highest numbers of species ever recorded in a single environment: 642 species were recorded over ten sites around the island, including many rare and endangered ones.

Yet the integrity of the biodiverse ecosystem is thought to be under threat: with signs of blast fishing, fishing using poison and a lack of large predators, the sites’ biodiversity is endangered. Conservation International recommends immediate action to formally protect the area, with commercial fishing strictly forbidden all around the island. The plan should include zoning of the reef, with some no-take sites and some sites designated for fishing by local people. The organisation also proposes that ecotourism might be set up to help local populations - whose primary income comes from fishing - gain financial benefit from keeping the ecosystem intact.

More information on the Conservation International website and the Guardian.

Read more about overfishing and coral reefs in our research library. 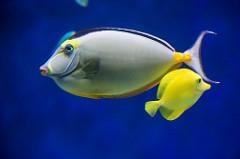